Antigone is one of Sophocles seven surviving plays. It is widely considered on of the best plays of all time. For any actor, this is an essential play to read.

The Palace of Thebes, Ancient Greece — Two brothers, Eteocles and Polyneices (both the sons of Oedipus), have killed one another, both in a bid for the throne. The now-King Creon has decreed that Eteocles will receive an honourable burial, while his traitorous brother Polyneices, will be left unburied to rot or be eaten by animals — an affront to the Greek Gods. Anyone caught trying to bury Polyneices will be put to death.

Antigone, sister to Eteocles and Polyneices, and Creon’s niece, secretly meets her sister Ismene to convince Ismene to help her bury Polyneices anyway. When Ismene refuses to help, Antigone disowns her, vowing to bury Polyneices herself. 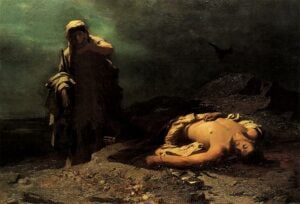 King Creon secures the support of a Chorus of the city’s elders for his decree against Polyneices’ burial, but a guard announces that someone has already tried to bury the body. Under pain of his own death, the guard is sent to root out the culprit. Polyneices is exhumed, and Antigone is found trying to bury him again, this time in broad daylight. When brought before Creon, Antigone does not deny her actions.

Locked in opposing moral stances, Antigone and Creon spar, with Antigone believing that the decree of the Gods trumps the decree of a King. Outraged, and certain that Ismene must also have known of Antigone’s actions, he brings her to the palace. Ismene confesses to the burial in a bid to die alongside her sister, but Antigone rejects her story, preferring to die alone. Both sisters are imprisoned.

The king’s son Haemon, engaged to Antigone, pledges allegiance to his father, but gingerly suggests that Creon spare her, claiming that the city, in truth, mourns for Antigone. Their conversation dissolves in anger, and Haemon vows never to see his father again.

Creon decides that Ismene will be spared, and that Antigone will be buried alive in an underground cave. Despite her protests, she is taken away. The Chorus grieve her fate.

The blind prophet Tiresias warns Creon against the act, foretelling that Creon will lose his own son for the mistake of his actions; the Gods are angry. The King accuses Tiresias of corruption, but Tiresias prophesies Polyneices must be buried and Antigone released, or Creon will be despised in all of Greece and no sacrifices will be received from Thebes. Terrified, the Chorus urge Creon to accept Tiresias’ prophecy.

Creon agrees to right his past wrongs, when a Messenger brings word that Haemon has killed himself. After Polyneices was buried, Antigone hanged herself, and, on finding her body, Haemon stabbed himself.

Creon appears with Haemon’s body, lamenting that his own actions have caused the death of his son. Another messenger comes, now with news that Eurydice, the mother of Haemon and wife to Creon, on hearing of the death of Haemon has also killed herself, using her last breath to issue a curse against her husband. Creon has repented too late, and now must bear the burden of his dead family.

The Importance of Being Earnest