Just like the first time you’re faced with performing a full length Shakespeare, making your own web series can seem overwhelming in the beginning. But as with any acting role, there’s nothing more to it than doing your research, committing it to memory, and diving right in. We’ll be sharing an overview of how we went about creating our web series; what worked, what didn’t, and what we’d do differently next time.

Why Make a Web Series?

We started out with a theatre script that Val had written a few years before. The premise was too big to fit into a short film, but a feature felt too ambitious. A web series format allowed us to be flexible with structure while affording us the screen time we needed. Starting with a pre-established concept provided us with boundaries that kept us on track. Less time spent brainstorming hypotheticals pushed us to get cracking on productive scriptwriting.

With a few characters and story beats in mind, we fit the story into a general outline and let the number of episodes be determined by how much material was available. When we were sitting down to write, we’d go episode by episode. Breaking it down like this gave us a simple framework to get a completed draft down on paper.

This was a natural way to work, but not necessarily the best approach. Specifically crafting each episode rather than chopping a full story into parts would have reduced some of the restructuring we faced in the edit. At the time, our priority was to get a full, functional script so we could start on pre-production. The script was actually never locked off (we had to add and adjust scenes even during the shoot) so the aim wasn’t to make something perfect – just to have a blueprint to work with.

What if You’re Not a Writer?

If you have never written anything in your life, then pick something from your acting history. It could be a character, a setting, or even just a single joke. If it’s something that could be used as a prompt for an improv scene, then you’re golden. Practical prompts will give you a better head start than themes or emotions – tangible problems are solvable problems – and the heart of your story will emerge naturally along the way. 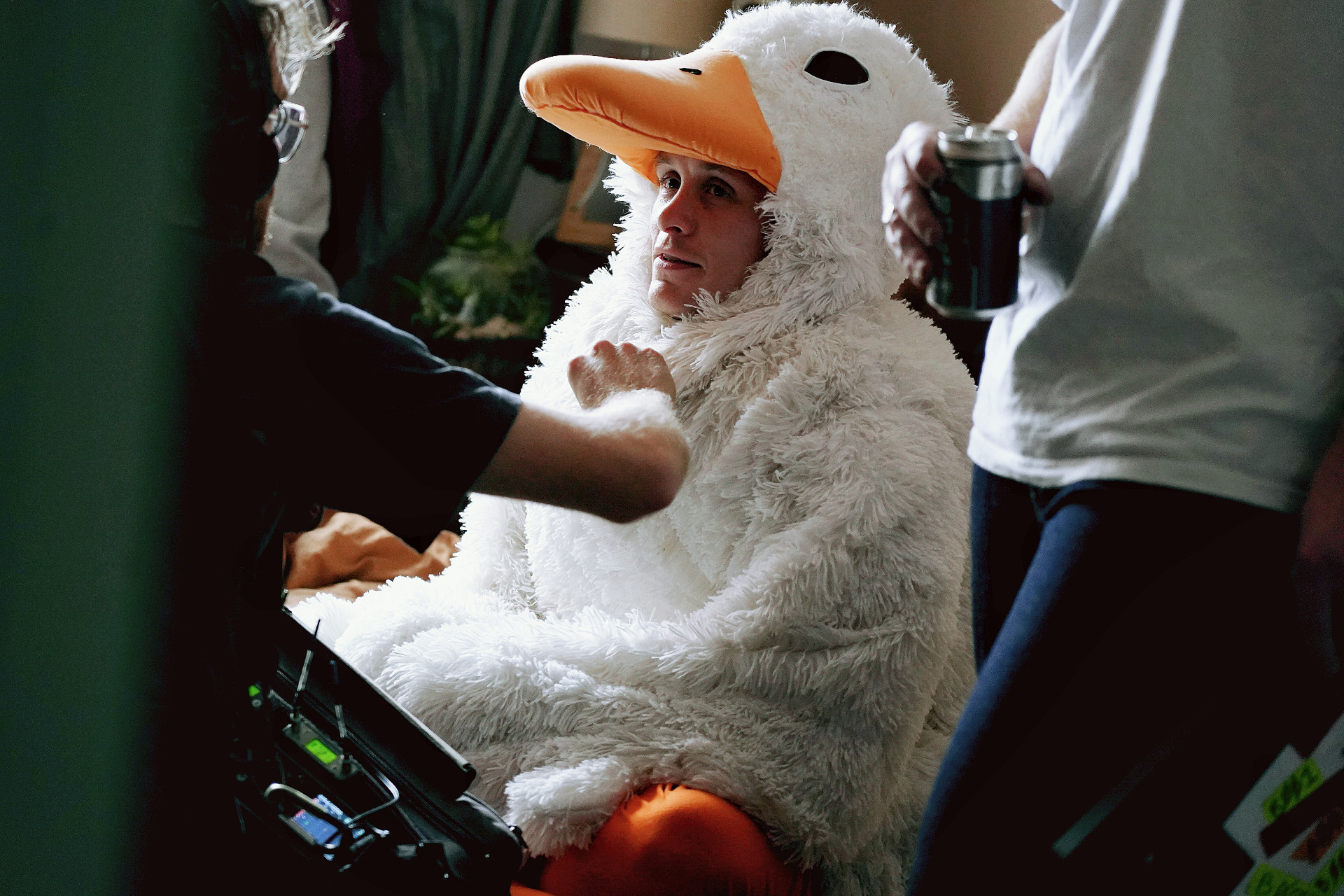 If you’re producing, it’s a good idea to get someone else on board to direct. Even if you’re producing a micro-tiny-super-low budget production, it’s great practice to delegate roles. The other departments will appreciate the clarity and attention it provides.

If you’re directing, you’ll want to stay busy with the script, actors, and visual planning. The finer details of catering deliveries, transport & parking logistics or gear hire limitations can easily overpower your creative capacity. On top of that, legal & financial matters might include contracts, location viability, or Covid measures.

Once we had our script in a satisfactory shape, we could start looking at how much this whole thing would cost. The biggest costs are equipment, wages, and catering, but every little bit adds up and you’ll be tweaking your budget as often as your script.

How much it costs is however much you’re willing to spend. We had a budget that far outweighed our experience and it was challenging to keep up with the high bar that was set. If there’s a couple of things to learn from this, they are:

And never forget about post-production! Assess the level of budget you worked with for your shoot to see how much you’re willing to invest in the final product. The budget for post usually falls at around half of what it cost to shoot it. 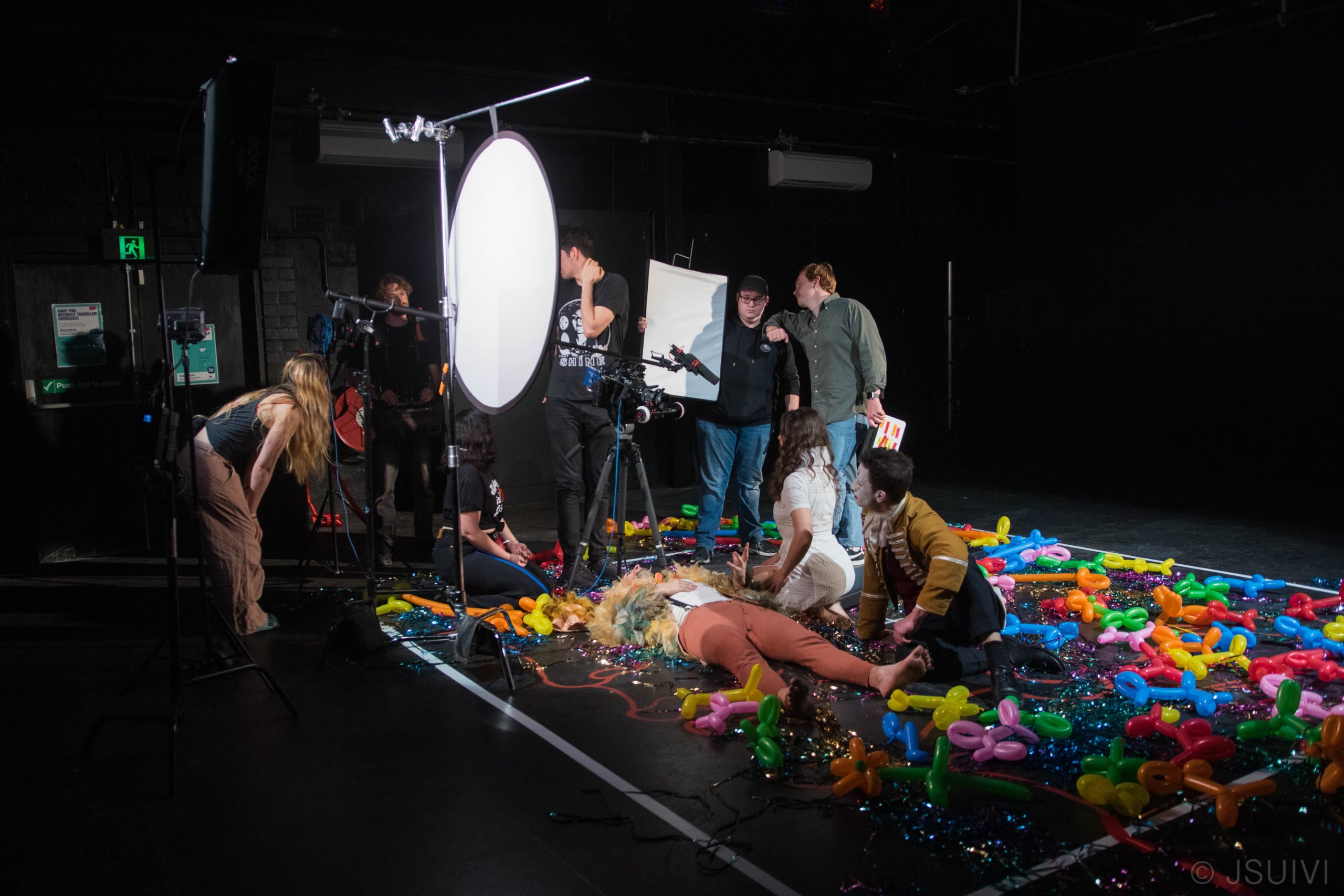 Crewing For a Web Series: Where to Start?

The timeline for making our budget crossed over with casting and finding our crew. First Assistant Directors and Producers are the key to avoiding nasty surprises and should be the first crew members you look for. A producer can help you put together your budget, then the First AD will let you know if your script is realistically possible in the number of shoot days you can afford. These two roles will ensure that the logistics are taken care of so you don’t lose focus on why you began this endeavor in the first place.

Crewing For a Web Series: Where to Look?

Casting was a cinch with most of our friends being actors, but our crew contacts were a bit thin. Lucky for us, producing original work is networking at its friendliest. Begging and borrowing can actually lead to great relationships and there are plenty of talented professionals who are paying their bills through commercial work. Many were happy to come on board for less than their going rate because they were intrigued by the script. The downside here was competing work. A few crew members understandably had to take on full-wage work that conflicted with our schedule.

This made for a challenging phase; should we set our dates now or schedule them around cast and crew availability? The annoying answer is that it’s a bit of both. There are so many moving parts that it was necessary to set some of them in stone, but remain as accommodating as possible to our generous collaborators. We just chipped away at progress while fixing the problems that arose, crossing our fingers that the stars would align.

The number of aspects involved in pre-production is mind-boggling, and all of them are expertly covered around the internet. To avoid drowning in the ocean of information, we first focused on scouting locations, planning the shots & production design, and left creating a shooting schedule until we had a few more puzzle pieces locked in. Our crew was by far the best source of information and the series wouldn’t be possible without the collaboration involved in this stage.

With all this new input, we were re-working the project constantly. Some of the changes were because there was a better way of approaching a scene, but others weren’t so positive. We had locations change because of cost, availability & lighting conditions. One location was scrapped because there was a flightpath directly over it. A change of venue can completely change the tone of a scene, so rewrites and last-minute solutions became routine.

On our shoot, we wanted to give the actors the freedom to riff. To make sure this rough and loose attitude wasn’t going to leave us with footage we couldn’t use, there were some technical requirements we planned for. The sound recordist set up each actor with their own lapel mic and was always recording with a boom. We also shot as much as we could with two cameras. It took a little longer to set up, but would halve the time it took to shoot dialogue scenes. The main consideration here was to capture organic interaction. If there was a bit of improv, a skipped line or an unexpected moment of absolute gold, we could still use it even if it wouldn’t cut together with any of the other takes. 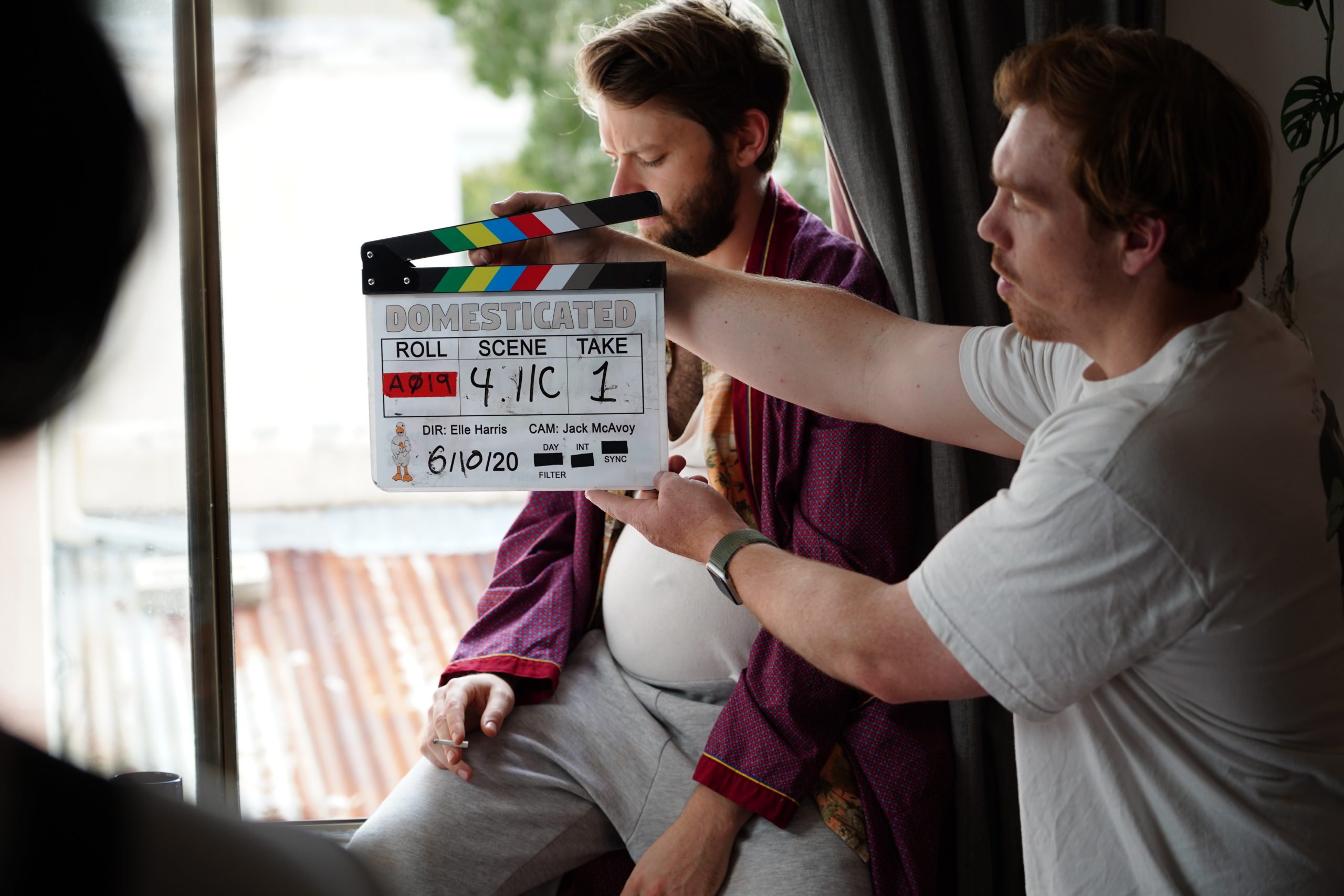 We planned a 10 day shoot spread over 2 weeks. It turned out to be a blessing that we had so many adjustments to make in pre-production, because we were about to put that practise to good use.

One of the best decisions we made on this project was to recruit another producer a week before we started shooting. One of our lead actors got a TV job and had to leave on Day 2 – after we had already shot a scene with them on Day One. Then on Day 3, we figured we were about to get rained out from our exterior location and had to completely reshuffle shooting days. We had our three original producers multi-tasking; directors, 1st ADs, and actors all have full time responsibilities on set, so having a dedicated producer on board was an absolute necessity.

Seeing your work come together is the best learning curve, and you can always edit it yourself to maximise your time watching the takes. Dissecting what worked, what didn’t, and why can be extremely valuable. Because of the scope of our project, we worked with an editor and again, the collaboration paid off. A fresh set of eyes led to reworking entire episodes, reordering some scenes, cutting others entirely. It’s the last rewrite of the script from an entirely new perspective. Add some sound design & composition, and in our case a colour grade, and you’ve got yourself a web series!

In reality, the post production was the longest stage of our project. We spent about 3 months mulling over the script, 7 months on pre-production, 2 weeks on set, and over a year in post-production. The biggest challenge here was maintaining momentum. Cast and crew move on to their next jobs and you’re left with a few hard drives and a significant sleep debt. But it’s also the most rewarding part, and there’s really no deadline other than one you might set for yourself. The Fast, Cheap, or Good ratio comes into play – you can only ever choose two out of the three – and it’s been worth it to take this phase slow. It’s an expensive process if you’re outsourcing these skills, and it’s been invaluable to take this time to reflect on our work. 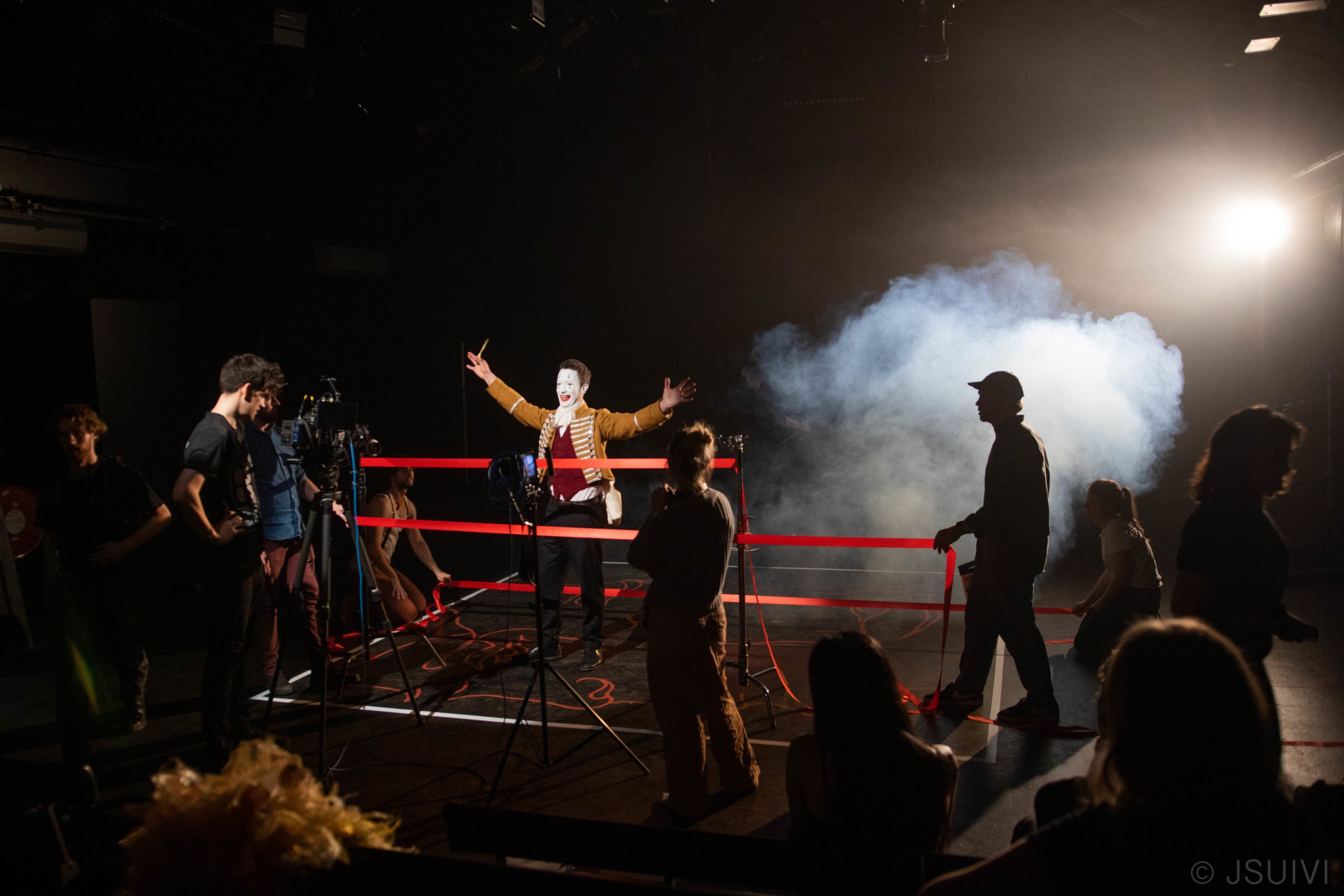 Before the Credits Roll…

Here are a few bonus tips that we learned the hard way:

How to discover your X-Factor

How to Learn Lines Fast

An Actor’s Guide to Devising Work