Tyrone Family Summer Home, August 1912 — Across the span of one long, almost uneventful day, Eugene O’Neill reveals the cycles of addiction, the entrenched relationships and recurring conversations of the Tyrone family as they move towards night, and as their repetitive behaviour moves each closer to his own undoing.

Over the course of this one day of many, the family are all at their summer house; father James, a retired actor, mother Mary, who has just returned after spending time at a sanitorium for a morphine addiction, unemployed oldest son Jamie, and the youngest Edmund who is ill with a terrible cough. 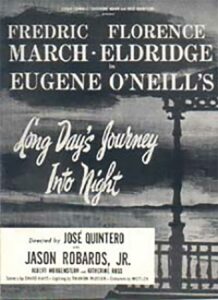 It will become clear that Mary is in fact still addicted to morphine, to the disappointment of her family, as she moves through states of lucidity and drug-induced nostalgia for her adolescence — the time in her life when she was happiest. James and Jamie both become increasingly drunk as the day wears on, sparring with one another as James’ stinginess and Jamie’s laziness cause each to chip away at the other.

Things happen, though always offstage; Mary has spent the night sleeping in the guest room, tipping off her husband and sons that she is most likely once again using morphine. Edmund goes into town to have his illness assessed, only to find that he has consumption, which could be cured with a stay at a very expensive sanitorium, though James agrees grudgingly only to the cheapest option, invested as he is only in his real estate ventures. James and Jamie accompany Edmund, their escape from the house an opportunity for more drink. Mary steps out, quite likely to get more morphine. Jamie doesn’t return with his father and brother, instead staying out until he is brimming with drink and fresh from a visit to the brothel.

Edmund leaves again after Mary tries to draw him and her husband into her drug-addled musings. Dinner never materialises. Jamie will take a blow from both his father and his brother for running his mouth off about his mother.

Finally the night unspools, as the whole family gathers again under the same roof.

Through it all, we stay in the family room, wound in the relationships that hold and strangle the family — first Mary and Tyrone, Tyrone and Jamie, Edmund and Mary, Mary and Jamie,Tyrone and Edmund, Edmund and Jamie, the conversation unravelling the threads of resentment that bind them; James’ insistent cheapness, the indirect cause perhaps of Mary’s addiction. Mary’s inability to move into the present, Jamie and Edmund’s failure to be the men their father hoped they would be. The poet Edmund’s desire to live another life, his brother’s jealousy over his own wasted existence.

When Mary comes down the stairs finally in her wedding dress, completely transported to a morphine-fuelled otherworld, she speaks of her love for James when they first met. Back, in a way, to a beginning that we sense will be repeated in the family as long as there are days that must make their journey to night.

Edmund (Act 4)
Edmund: You’ve just told me some high spots in your memories. Want to hear mine? They’re all connected with the sea. Here’s one. When I was on the Squarehead square rigger, bound for Buenos Aires. Full moon in the trades. The old hooker driving fourteen knots. I lay on the bowsprit, facing astern, with the water foaming into spume under me, the masts with every sail white in the moonlight, towering high above me. I became drunk with the beauty and the singing rhythm of it, and for a moment I lost myself–actually lost my life. I was set fee! I dissolved in the sea, became white sails and flying spray, became beauty and rhythm, became moonlight and the ship and the high dim-starred sky! I belonged without, past or future, within peace and unity and a wild joy, within something greater than my own life, or the life of Man, to Life itself! To God if you want to put it that way. Then another time, on the American line, when I was lookout in the crow’s nest on the dawn watch. A calm sea, that time. Only a lazy ground swell and a slow drowsy roll of the ship. The passengers asleep and none of the crew in sight. No sound of man. Black smoke pouring from the funnels behind and beneath me. Dreaming, not keeping lookout, feeling alone, and above and apart, watching the dawn creep like a painted dream over the sky and sea which slept together. Then the moment of ecstatic freedom came. The peace, the end of the quest, the last harbor, the joy of belonging to a fulfillment beyond men’s lousy, pitiful, greedy fears and hopes and dreams! And several other times in my life, when I was swimming far out, or lying alone on the beach, I have had the same experience. Became the sun, the hot sand, green seaweed anchored to a rock, swaying in the tide. Like a saint’s vision of beatitude. Like the veil of things as they seem drawn back by an unseen hand. For a second you see–and seeing the secret, are the secret. For a second there is meaning! Then the hand lets the veil fall and you are alone, lost in the fog again, and you stumble on toward nowhere, for no good reason! (He grins wryly) It was a great mistake my being born a man, I would have been much more successful as a seagull or a fish. As it is I will always be a stranger who never feels at home, who does not really want and is not really wanted, who can never belong, who must always be a little in love with death!
Edmund (Act 4)
Edmund: God, Papa, ever since I went to sea and was on my own, and found out what hard work for little pay was, and what it felt like to be broke, and starve, and camp on park benches because I had no place to sleep, I’ve tried to be fair to you because I knew what you’d been up against as a kid. I’ve tried to make allowances. Christ, you have to make allowances in this damned family or go nuts! I have tried to make allowances for myself when I remember all the rotten stuff I’ve pulled! I’ve tried to feel like Mama that you can’t help being what you are where money is concerned. But God Almighty, this last stunt of yours is too much! It makes me want to puke! Not because of the rotten way you’re treating me. To hell with that! I’ve treated you rottenly, in my way, more than once. But to think when it’s a question of your son having consumption, you can show yourself up before the whole town as such a stinking old tightwad! Don’t you know Hardy will talk and the whole damn town will know! Jesus, Papa, haven’t you any pride or shame? (Bursting with rage.) And don’t think I’ll let you get away with it! I won’t go to any damned state farm just to save you a few lousy dollars to buy more bum property with! You stinking old miser! (He chokes huskily, his voice trembling with rage, and then is shaken by a fit of coughing.)
Tweet
Share
Pin