Punctuation. Oh, man. Punctuation is absolutely vital to an actor’s performance, it is the writer communicating with you the actor about who this character is, how they relate to the world around them and the intricacies of that character’s mental state. Not only that, punctuation is – when you really learn what’s going on – punctuation is like musical notation. You see, commas, full stops, exclamation and question marks they all have their own required vocal inflections, that when you begin to actively honour, will change the way you approach every piece of film, theatre and television you work on, for the rest of your life. Not only that, but writers have not put punctuation there by mistake, they have agonised potentially for years over the detail here. A comma is vastly different from a full stop, and they have put it in a certain place for a reason. Whatever the punctuation you must honour it, and do it as it is written!  This article, while it seems very pedestrian at the outset, is going to rock your world, if you allow yourself to fully take this on!

Full stops denote the end of a thought. They show the character reaching the end of an idea, and when you think about the end of an idea it has some finality to it right? It is an ending and as such a full stop requires a downward inflection. The last sound that comes out of your mouth for the final word in the sentence needs to resolve to a lower pitch than what came before it. Check out the first part of this monologue from the movie Swordfish with John Travolta and some terrible facial hair.

Here is the script for that section: 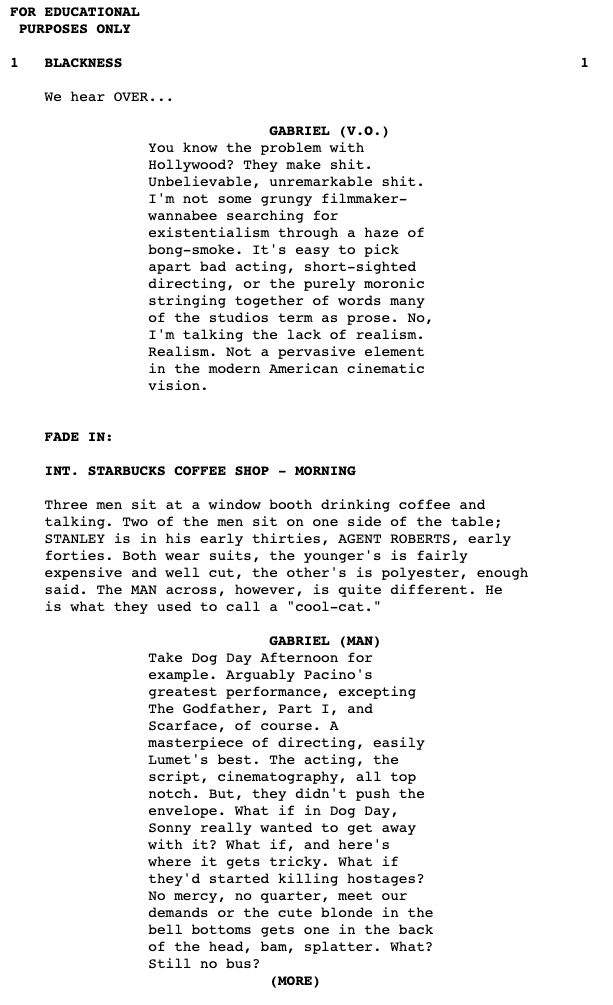 Listen to how Travolta hits that punctuation. Listen to how he drops his pitch down on the final syllable of words at the end of a sentence. Wherever there is a full stop, he inflects downward in the final moments of the sentence to let us know that the thought has ended in this position. This is really important to get right as the common mistakes here are two-fold.

Ever heard a really boring speaker? Been at a wedding and inside the first 10 seconds of a speech started wishing for the sweet release of death or divorce? Yeah me too – most likely because the person giving the speech was inflecting downward for every possible piece of punctuation. If you inflect down all the time, it’s boring. You must only inflect down when there is a full stop that tells you to do so. You do not get to put punctuation in where you want it. If you want to do that, go be a writer. Love that for you.

Common mistake 2: No downward inflection at all.

This is very common with Australians who want to seem chill and easy going. The finality of a full stop at the end of a sentence makes us think of the finality of our own existence and to keep the existential dread away, we inflect up all the time. This makes you sound like you are constantly questioning things and is very confusing for people of other nations. Again, you must honour the punctuation in the text, you do not get to make up your own. See a full stop – inflect down. Simple as that.

First thing I do when I get a script is to go through and mark my punctuation. I circle the location of the full stop and put a downward arrow above it to denote the required inflection and a pause. I’d recommend you do the same!

Commas, predominantly, are part of a list, a series of thoughts, grouped together that require, a little break in them, but the thought the key thought is still alive, still up in the air, waiting to come back down, it is for this reason that commas for the actor denote an upward inflection. Now read that previous sentence again, out loud, and as you do so, give a conscious upward inflection to each comma. You can see that a slight upward inflection and a tiny little pause can do so much for you here. Again refer to Travolta above in Swordfish, look how he handles that sentence about Pacino’s greatest films. Everyone ends in a slight upward inflection and it lets the audience know that the thought is still alive, it is continuing until the end of the sentence.

Again as soon as I get my script, the first thing I do is go through and mark every piece of punctuation in it. I circle my commas and put an upwards arrow above them to denote the rise in inflection. This next video is going to help for commas and our next two punctuation marks. See how fantastically J.K. Simmons hits his commas and full stops in this. Take a look at this hectic scene from Whiplash:

Now take a look at around 2.18 for the line ‘So you do know the difference!’ Ending in an exclamation mark. An exclamation is arguably the easiest one to deal with in my opinion. It is a variation on the full stop that requires intention behind it. An exclamation mark is the end of a sentence and the end of a thought where the character actively exclaims! You have to hit the end of that sentence with vigor and intensity. It doesn’t necessarily need to be louder, although that will work, it needs to have intensity behind it – you need to actively exclaim. You cannot be laid back or chilled out about an exclamation mark. The Oxford dictionary defines exclaim as: ‘​to say something suddenly and loudly, especially because of strong emotion or pain.’ So do that. A downward inflection is preferable here, but the intention behind it is the key part. See J.K. Simmons in the clip above.

Staying with Whiplash for a second. Look at the line ‘Was I rushing or was I dragging?’ Notice what Simmons does with his voice. He uses a curling upward inflection to denote a question mark. This in my mind is absolutely essential, especially on stage, that if you have a question mark – you really ask the question! You have to prompt the other person to respond! Even if the question is a rhetorical one. If the writer had wanted the character to downwardly inflect at this point they would have put a full stop. But they didn’t, there is a question mark there for a reason and it requires investigation. Your character really wants to get something from the other person in the scene. Simmons in this scene from Whiplash wants to see if the young drummer understands the basics of tempo. He is testing him and then harshly punishing him.

Again, every time you see a question mark, it denotes an upward inflection and a slight pause.

Aahh the ellipsis, these guys can be tricky. So an ellipsis is a thought that has been interrupted by something. Either another thought, an image, a memory or another character talking. Take a look at Inglorious Bastards here:

An exceptional performance from everyone here, and you can see what Christoph Waltz does with all these ellipses. He lets the thought carry, with a slight upward inflection and allows the imagery of the moment to fill the gap. He is very specific with how he uses them and lets that empty space sit for a moment as well. I usually approach these with a slight upward inflection and ensure an image is firmly set in my memory and ready be utilised for this moment.

The dash, colon and semicolon all fill similar roles for an actor approaching the text, they are all an upward inflection and get the same treatment as commas. The important thing to note is if they are around a list when that list begins and ends. Quite often the word that follows a colon will be a keyword in a paragraph so keep an eye on that.

Additionally, some writers can use dashes or slashes to show two characters talking over each other at the same time. So be aware of that too. Just as with all the other punctuation above, mark your punctuation in your text before you get started!

Just a quick side note here and not strictly punctuation I know, but italics are an interesting one. Most often they are used to show stage directions in a play and you will never see them in film and TV scripts. However, I have noticed some writers are using italics to denote keywords in a sentence for a character. This is worth examining, depending on the text you are working on and I would try and emphasise them if the writer has specified them so thoroughly.

So there you have it, folks! An in-depth analysis of the various types of punctuation and their appropriate vocal inflection for actors. You can see in all of these clips how specific the actors are with their punctuation. They all do a wonderful job of it and in doing so actively honour the writer’s work which helps tell the story of the film so much better. If you can get to be a militant in using punctuation as well you will be amazed at how much it adds to your work!  Go forth and enjoy!

What is an Inner Monologue?

How to Become a Dramaturg