StageMilk / Must Read Articles! / Soliloquy Twisting: To Be, Or Not To Be… An American Politician?

One exercise, soliloquy twisting, can help you put the psychology of a character into perspective by completely twisting their words as if they were meant for other characters or voices. At every point in a story characters are dealing with conflict, so mixing up how a character could approach conflict from other viewpoints can help flesh out the essence of the character’s core motivation – and perhaps lead to new insights. How do they deal with conflict? Do they question or waiver? Incite? Redirect? Diffuse? Or engage with it? How many ways could their words be stretched or interpreted? Or how could other characters interpret them, for that matter?

Below is an example twisting Hamlet’s famous “To be, or not to be?” soliloquy, using – yes, as crazy as it might sound – American politicians as the inspiration for voices. You don’t have to use characters within the same script. Think outside the box – completely. Sometimes the ridiculous can help us reinvent the mundane. Just take a scene that’s at the core of a character and attack, attack, attack it from all kinds of angles with all kinds of personalities to flush out different approaches to the conflict.

In the example, note how each politician’s speaking style reinforces their hypothetical approach to conflict, if they were in Hamlet’s shoes.* For instance, Donald Trump in real life often interjects side comments, which literally diffuse his speech (and reflect his tactic to diffuse conflict). Could that tactic be employed through your diction in some way? Or your expressions? Imagine the same soliloquy reinterpreted by these or any number of politicians, or by comic super heroes, for that matter. The goal in the exercise is simply to provide counterpoints for comparison and to help spur creativity. Anything goes. Enjoy.

Hamlet’s original ‘To Be, Or Not To Be’ soliloquy:
To be, or not to be? That is the question. Whether ’tis nobler in the mind to suffer the slings and arrows of outrageous fortune, or to take arms against a sea of troubles, and by opposing end them? To die: to sleep; no more; and by a sleep to say we end the heart-ache and the thousand natural shocks that flesh is heir to, ’tis a consummation devoutly to be wish’d.

Bernie Sanders as Hamlet, inciting conflict:
To be, or not to be? That is the only question. If you are noble in the mind, you already know it is the slings and arrows of those with outrageous fortune that have caused the sea of troubles we need to oppose. They’re trying to kill us, trying to put us to sleep. But no more. We have endured the heartache and the thousand natural shocks with which they have oppressed us. We must put it to an end!

Hillary Clinton as Hamlet, redirecting conflict:
To be, or not to be? That is not the only question. You have to ask yourself if the slings and arrows of those with outrageous fortune are the only slings and arrows you suffer? People suffer many things, and it isn’t noble to suffer alone. We have a sea of troubles to oppose. We can’t kill ourselves over one issue. Just putting one issue to sleep won’t end all the heartache and the thousand natural shocks that affect our lives. To think that would just be delusional! 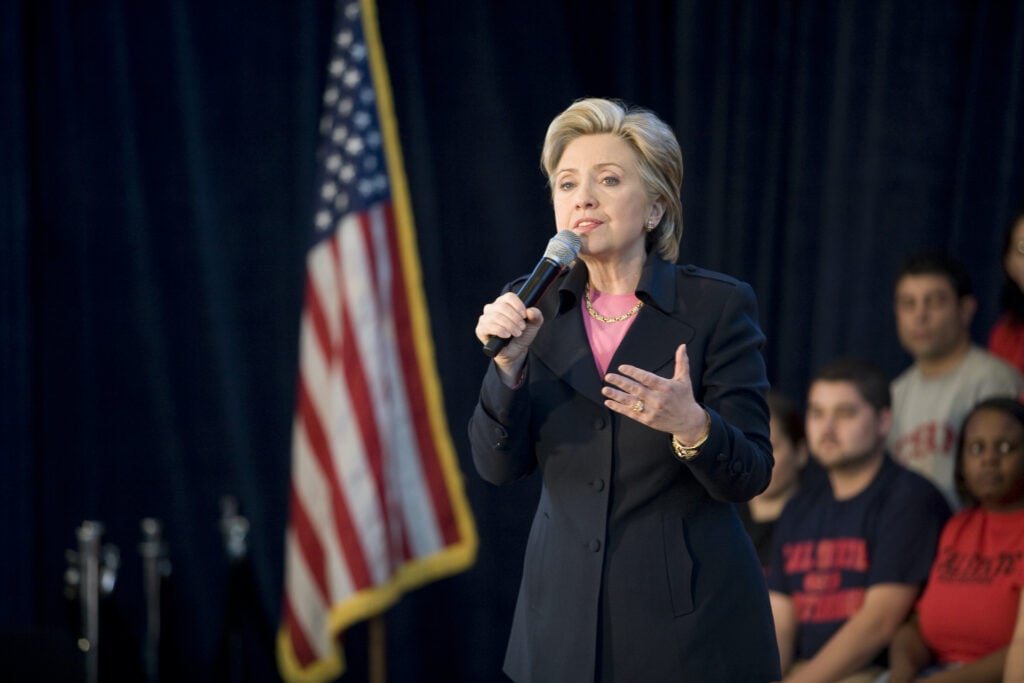 Donald Trump as Hamlet, diffusing conflict:
To be like me, or not to be like me? Why wouldn’t it be the question? I’m a great guy. I am. I don’t have to tell you that. But I will tell you about these slings and arrows they’re saying those with outrageous fortune are throwing at you… You know, by people like me. Because my fortune is outrageous, like a great outrageous. They’re just jealous of people like me, and noble people like you, who want to take arms against the sea of troubles they’ve created – and they’ve created a really bad one, really, really bad one, people — because we’ll end them. We’re not going to die. We’re not going to sleep. Oh, if they think we’re going to get a little heartache or worked up over the thousand eensy, weensy shocks they’re trying to scare us with, they’re dreaming, baby. Just dreaming!

Marco Rubio as Hamlet, engaging conflict:
To be, or not to be? That is not the question you should be asking. Because the only answer is
“to be.” It isn’t noble to suffer without the opportunity for outrageous fortune. You have the right to take arms and to oppose the sea of troubles created by those who want you to die, who want you to sleep, who want you to give into heartache and the thousand natural shocks they cause. No more. It is a consummation we can achieve!

*All of the above hypothetical soliloquies are just that: fictional interpretations mimicking the public speaking styles of the respective politicians. The politicians never uttered those words themselves, and none are meant as any endorsement.

Don’t Use Your Phone on Set