Actor, Bricklayer, Soldier, Felon, Poet. Ben Jonson is largely considered one the greatest literary minds and influences in English Literature. He is most well known for popularising the Comedy of Humors. Though he may not be as well known as William Shakespeare he was just one of his many contemporaries. They might not have always seen eye to eye (in fact they were largely considered rivals), in their later years and after William had shuffled off this mortal coil, I would like to believe they found camaraderie. Jonson famously wrote the preface to Shakespeare’s First Folio:

This Figure, that thou here feest put,
It was for gentle Shakespeare cut:
Wherein the Grauer had a strife
with Naure, to out-doo the life:
O, could he but haue dravvne his vvit
As vvell in frasse, as he hath hit
Hisface; the Print vvould then surpasse
All, that vvas euer in frasse.
But, since he cannot, Reader, looke
Not on his picture, but his Booke – BJ

Take from that what you will.

There is a lot to explore when it comes to Jonson, he certainly did live a colourful life. But we’re here to explore his plays. So without further ado, let’s dive in, and maybe I can highlight just a few of the mad tales of Jonson’s life along the way. 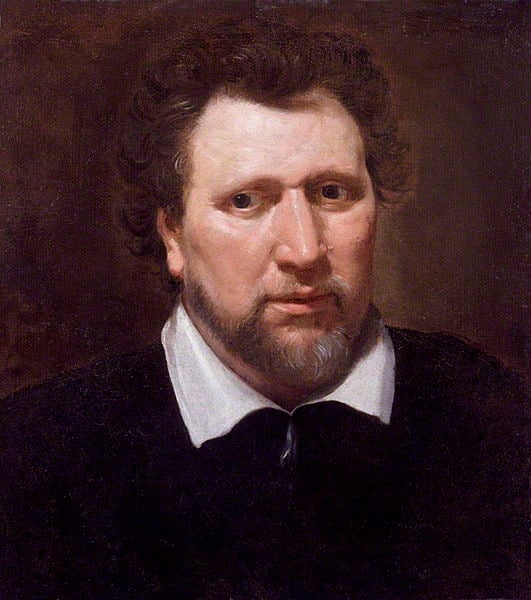 While not one of his most famous plays, or even one of his best, it certainly is an important part of the cannon of his work solely for the fact that it landed him in gaol! Unfortunately, dear reader, there are no known copies in existence. Not even on Amazon, I know.

Isle of Dogs landed Jonson and friends in jail for what was reported to the authorities as a “lewd plaie” and full of “slanderous matter”. Isle of Dogs was a satirical comedy  and it’s believed that it directly satirised the Queens councillors themselves, as lap dogs, hence the suppression and ultimate erasure of the play. The charges were later dropped on Jonson and pals.

Now this play is largely credited as the introduction of Comedy of Humors to English literature. It follows the latin model quite closely, however before 1598 there is no record of this sub-genre in English literature. The play follows a man who is concerned about the moral development of his son, so he decides to spy on his son. However his espionage is continually thwarted by his servant, Brainworm, who he employs for this very purpose. Jonson also went on to write a “sequel?” to this called Every Man Out of His Humor which did not meet as great a success. It also starred this guy you might have heard of, actor and playwright William Shakespeare and was first performed at The Globe Theatre.

Here we find ourselves at the beginning of the Jacobean Era and consequently the United Kingdom. Why was it united you ask? Well because England had run out Kings and Queens so they asked Scotland if they could borrow theirs and thus a United Kingdom was born. This play is a city comedy about Touchstone, a London goldsmith, and his two apprentices, Quicksilver and Golding. The play had a strong anti Scottish sentiment and was seen as an attack on the newly crowned King, and you’ll never guess what happened next! That’s right; Jonson was sent back to jail.

The return of the great Ben Jonson was marked by the play Volpone, largely considered his greatest play. Volpone shone a mirror on, and satirised the money lust that was rife throughout London. This play follows Volpone, a miser who is pretending to be deathly ill in order to trick his would-be heirs. Little does he know that his servant Mosca has hatched a plan to dupe everyone and make himself the heir to Volpone’s fortune. His plan succeeds for most of the play, however Volpone reveals his trickery from the beginning and most of the cast, including Volpone, wind up being punished.

The Alchemist is considered Jonson’s most famous play. It satirises firstly, the practice of alchemy itself, but also the general quackery that was going on in London. You have to remember this was during a nine year outbreak of the plague. The play follows Jeremy, a servant, and his conspirators who use his masters house while the master is away, as the stage on which they will try and con a number of poor souls. Throughout a series of episodes the play descends into madness before the master returns, Jeremy ultimately is punished and begs the audience for forgiveness.

Ben Jonson came up against countless obstacles throughout his life, but nevertheless gave gifts to the English stage and to English literature that we still find great value in today. Although his legacy is not on the almost deity-like status of Shakespeare, there is wealth of knowledge and enjoyment to be found in his works, and I’ve only mentioned a few, so dive deep, explore and enjoy the many wonderful works of Ben Jonson.