Tips to Tackle any Scene | How to Nail any Acting Scene

I had an amazing acting teacher once—this big, burly, powerful Scotsman called Michael. On our first day, he said “All plays have three things. Sex, death and sabre tooth tigers. You find me the play, I’ll find you the sex, death and sabre tooth tigers!” I piped up with “Where are the sabre tooth tigers in Hamlet?” He replied with “Act 3, scene 4 look it up.” I’m still trying to find those tigers, but what Michael was trying to say (I think) was that all plays have common elements, all scenes have common elements and there is a process you can apply to help you tackle any scene. So you show me the scene, and I’ll show you my top tips for tackling it—without the sabre tooth tigers.

The first thing to look at when you are looking at a scene is punctuation. Punctuation is the writer communicating with you, the actor, across the centuries. Through the punctuation, you can see a character’s mental state, their emotional state, and their overall approach to life. A character who has a lot of full stops thinks in short, sharp sentences. They are likely to be direct and punchy and utilising their rationality as a primary centre. A character with a lot of commas—big, long, rambling sentences—is hardly drawing breath, emotionally connected or maybe in the midst of a memory or emotional moment. Of course, this isn’t a blanket rule, but it does give you a starting point. It is vital that you honour the playwright’s punctuation. They have agonised over every comma, every bit of punctuation is there for a reason. It is your job, as the actor, to honour that and also to figure out why that punctuation is being used in that spot.

For more info on getting the most from words on the page, check out our article on script analysis.

Every character, in every scene, in every moment of every script wants something. They have a reason why they are on stage and saying whatever dialogue they are saying. The legendary director Alfred Hitchcock said, “Drama is life with all the boring bits cut out.”

Your character has an objective: something that they are ruthlessly trying to pursue to get what they want. When you pursue this, there are no boring bits of just chilling out for the hell of it. Interrogate each line your character says. Why are they saying that? Why those words, specifically, out of all of the words in the dictionary, and in that order? There is no chaos or coincidence in the writers’ words. The character is saying them for a reason, to serve their objective. I tend to write my objectives like this:

Wants are driven by a characters needs. For example. Romeo, when he’s outside Juliet’s balcony: he wants to be with her romantically, but that isn’t what is driving him deeply. On the inside, he needs desperately to feel loved. He says it in his first scene with Benvolio. “Out of her favour, where I am in love.” He talks a lot about needing to be in love, but he’s only just met this girl, right? So the immediate thing is to get close to her, in order to feel that love he so desperately craves. An objective for Romeo might be:

I want to be with Juliet because I need to be in love.

An important note, make sure your objective is something you can get in that scene. If it’s something ethereal you won’t be able to get it in the scene and therefore your character will feel listless in the sea of performance. Don’t shoot for the super-objective, that drives your character’s arc.

Oh, and one final tip with objectives: notice how Juliet appears in Romeo’s objective? Good objectives involve the scene partner, every time. What do you want from them? When your objective has nobody else involved, the scene loses tension and conflict and we all might as well go home from the boredom.

For more information on objectives, look at our article on how to find your character’s objective.

Now listen, beats can be confusing. Everyone I have ever met has a slightly different interpretation of what a beat is and where they start and end, millions of ways of marking them etcetera. So here’s my overall guideline: beats denote a building of energy, until a change in energy. What that means is, the beat continues until someone exits or enters or the conversation stops or changes. I like to use beats to build narrative tension and increase the stakes of the through-line of the scene. See below:

Every scene tells a story. Every single one. A scene is part of the bigger story of the script for sure, but every scene has a beginning a middle and an end. Generally speaking, most confirm to the story outline below. 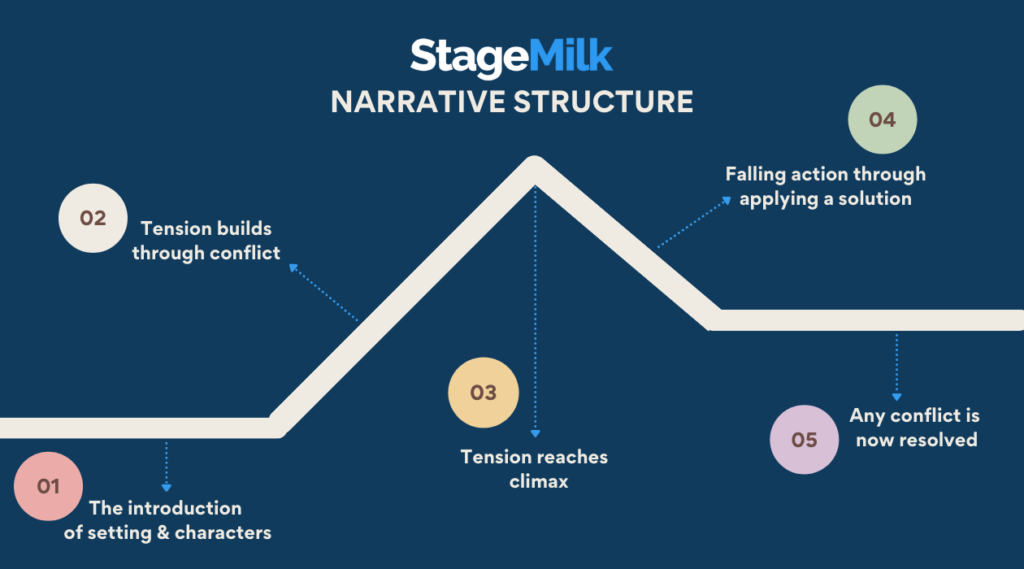 You can use your beats above, to work out what the narrative through-line of your scene is? What is the climax of it? The most important point of your scene, where the most vital information is revealed? Make sure that the energy of your scene builds up to that moment. So the audience can feel a cathartic release when that moment hits. Not all scenes are massively high stakes, I get that, but every scene does have a climax however big or small, it’s your job as the actor to find it and make it shine.

If you still feel lost, maybe think about beats as when your character’s actions change. Remember that your action is the how you get the what of your objective. If your character has been trying to flirt with somebody (action) to borrow $5 (objective) and that hasn’t worked, a beat change can happen when they think “This isn’t working, lemme try something else.” and they start to guilt, or beg, or intimidate.

What is really going on in this scene? Is what the characters say actually what they mean? Subtext is absolutely key in understanding what is happening in your scene. It might take a couple of reads of it, some investigation of the characters’ motivations and a thorough application of beats, before you really figure out what is happening. Take this scene from the movie Sideways:

Now clearly, the character played by Miles is talking about a lot more than a type of grape right? This is a man talking about how much he dislikes himself, he is opening up by having a vulnerable moment, talking with her about a topic they both understand, to make her understand him more. An actor who didn’t understand the subtext of this scene might assume that he was lecturing the other character about different grape varieties—when with a thorough understanding of the subtext this scene becomes so much more.

In a way, it’s kind of like catching sabre tooth tigers: challenging to get, but worth it once you’re there.

This comes out of the Atlantic acting school, set up by David Mamet and William H. Macy. Their big innovation was Practical Aesthetics: an amalgamation of Stanislavsky, Sanford Meisner and the Stoic philosopher Epictetus. The idea is three-fold; let me take you through a massively simplified version of the concept…

What does my character want from the other character? Answer literally: “I want them to get the money out of the till, etc.”
What is the essential action of the scene? To knock them off their high horse, bring them back to earth, make them see it’s going to be okay, etc.

Create an as if: make up a situation using real people you know that hasn’t happened. Use the imagined scenario as an improvisation, then hit the dialogue at the top of the scene.

This technique, to me, feels like a hack. It’s an acting hack folks! This can very quickly get you to somewhere close to the emotional heart of the scene—particularly the last point. If you make a realistic ‘As if’ using an imaged scenario, with real people from your personal life, you will be amazed at how quickly you can find yourself living the emotional truth of the scene.

You may find that this technique—and in fact all of the techniques I have gone through in this article—don’t work for you. That is totally okay! There is more than one way to skin a cat (or a sabre tooth tiger for that matter!) We have a tonne of acting resources on StageMilk.com as well as our online scene club, where you could try out of a few of these ideas each month and then get expert feedback on each scene you do! What a time to be alive… Hopefully, you did find something in this article that resonated with you; if so, why not share it around with your friends!