StageMilk / Acting Dictionary / What are ‘Beats’?

Beats. One of the most common terms in acting training and also one of the most amorphic. It seems like every acting teacher you speak too will have a slightly different interpretation of what exactly beats are and how to use them. Whenever you are overrun by information and perspectives, I think it’s best to go back to the source, the OG, the original and the best – Konstantin Stanislavski. See back in the 30’s a bunch of American actors and directors train with Stanislavski and/or his disciples – people like Lee Strasberg, Stella Adler, Stanford Meisner and so on, in all of these cases the thick Russian accents of these experts may have meant that the phrase ‘You must break the script up into little bits’ got translated as ‘little beats’ and obviously each of these legends took their own meanings from their Russian counterparts like some giant version of the Telephone Game.

Long story short, every acting trainer believes the same thing, that you must break down your script into smaller pieces, call them – beats, units, units of action or penguins if you like! The point is to identify the shifts in action, intention and thought that drive a character through the world. It also helps the actor learn their lines and makes scripts more manageable. Finally, properly beating out your script will show you the narrative arc of the character, in the scene, moving through the act to the climax of the play or film. In this article, I am going to refer to beats in two senses: in terms of the scene and in terms of the energy.

Again, there are millions of terms here scenic beats, units, tasks, events all of these terms refer to more or less the same idea: we are looking for a change in the physical world on the stage, a change in the topic of conversation, or importantly a change in tactic from a character. Let’s look at these one by one:

#1 Change in the physical world

The most obvious way to see a beat is the exit or the entry of a character into the space. Someone leaving or arriving denotes a shift in energy on the stage. You can see this at school when the teacher walks in the room. The mood of the group changes, the impact of a person of authority alters the energy in the room. The same thing happens when a manager walks on the floor of a retail store, or a general into the enlisted soldier’s mess hall. The same goes for when these people exit the space.

Sometimes, depending on the relationship between the characters the entry or exit of someone on or off stage may not result in a seismic shift, however it is always worth noting it as every change of people onstage alters the environment for the audience and this denotes a shift in energy whether the characters are fully aware of it or not.

#2 Change in the topic of conversation

The next thing to look out for is a change in the topic of conversation, and some interrogation into why it has changed. Here’s an example: 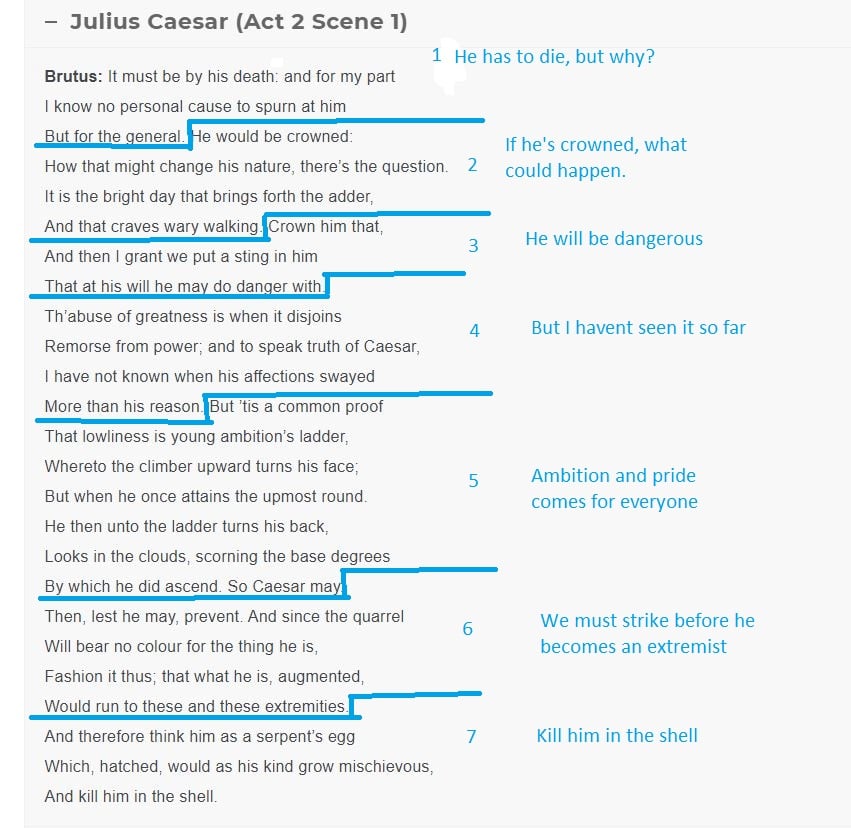 Firstly, note how I have scored my beats here. A vertical line to denote where the thought changes and horizontal lines either side to alert me that a beat change is coming up. As you can see, I have split this up into beats of various sizes, that coincide with the characters train of thought. Beats can be any size, what we are looking for is when the thoughts change and importantly – why. You can see that on the right-hand side I have named each beat, a title or an idea that encapsulates that section of the text. These are sometimes useful to use as your inner monologue, driving your thoughts between the text. You can also see how simple this makes this speech. It’s Brutus figuring out if his friend and mentor must be killed. How to solve this problem, by beating out the changes in conversation, you become aware of the changes in the logic of the scene.

By isolating the changes in thought and conversation that a character is going through you can get underneath the logos of the characters argument, begin to see the pathos of it and in doing so, understand the ethos you will need to bring this moment to life. Handy right?

These ones can be a little bit trickier, see a section from Hamlet below: 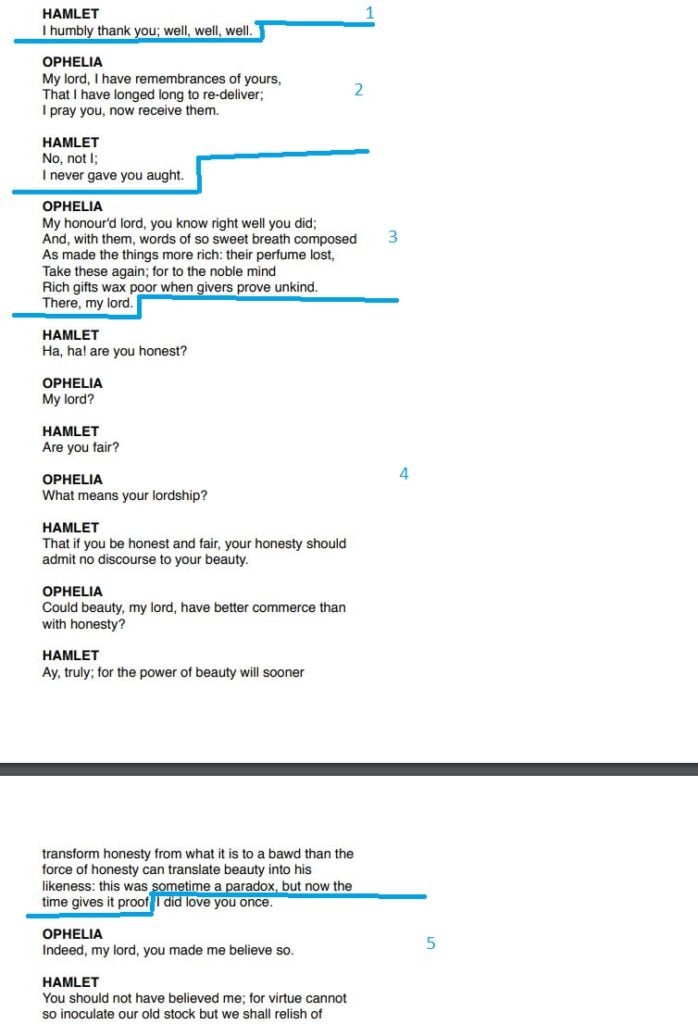 Hamlet in beat 1 is cordially thanking her for her question, his next statement is ‘I never gave you aught’ his tactics towards her change rapidly in this section, the part most thrilling is the beat change between beat 4 and beat 5. ‘I did love you once’ is a huge change of tactic and a standout moment in the play that in my opinion comes with a change in tactic. What is he trying to do to her by saying that line?

It’s important to mention here that each actor will have a slightly different interpretation of beats and what they mean or where they are placed. This is why it is so important to work with a director to give you guidance on these matters.

There you are, three key ways of identifying a beat, unit or unit of action in your script. Let’s talk about how to build them up with energy.

So now you know where your beat is, let’s talk about building it up. See every beat of action represents a section of the overall narrative arc. Narrative arc is how stories are told, I have an in-depth article on it here. We need to build the intensity, line online, through the beat until we get to the crisis moment of the beat, the apex of the action. Take a quick look at Barrack Obama here, now say what you like about his politics, no one can deny he is an incredible speaker. A big part of what makes him so compelling is his ability to build a beat to a crisis point, and resolve to a lower pitch and energy to start over again.

At exactly 12 minutes he ends the beat with ‘Out of many, one.’ By then he has reached the apex of the intensity of that moment, lets it settle and starts again with a lower tone, and contained energy. He builds, line on line, without dropping the energy of what he is saying, keeping his tone and intention at the same level until he reaches a punctuation mark. He then raises the pitch and tone of his voice and continues on, until his reaches another punctuation mark and so on and so forth until he hits the most important thing he has to say, let it ring in the air and brings the tone, the pitch and the energy back down to start a new beat.

This, as you can see, is an incredibly powerful technique to make people interested in what you are saying, it draws them in and all the great speakers of history have used it, for good and for evil.

If you add in this principle and make the decision with your scene partner that you will not let the energy drop during a beat, that you will lift your pitch, tone and energy to match or overtake theirs with every line you have until you reach the end of your marked beat, you will be amazed at the impact and the life that comes alive in your work.

There you have it folks! Beats, in all their complex, wordy nature and application. Undoubtedly, you will learn a different word or a slightly different approach to beats or units over your acting life, what you call them and where you put them is up to you and your director. What really matters though is that you use them, and if you add in the energetic component you will really bring that beat to life!

What is an Inner Monologue?

How to Become a Dramaturg