What do Lord of the Rings, Kramer vs Kramer, The Castle and La La Land have in common? Narrative structure. In fact you can think about pretty much any film, television show, play or conceptual physical theatre piece, hell you can think about dance or musicals or performance art. Anything that you feel has a story in it, and a story in it that you really connect to and sympathise with the characters, all of the stories in those mediums are going to follow traditional narrative structure, at least to some extent. Not only does this apply to whole plays or scripts it applies on a micro level as well, to every single scene, or monologue – hell sometimes this applies to individual lines! Narrative structure is the basis of storytelling and if you are able to understand how narrative structure works you can apply it to every audition you do and I guarantee you will be amazed by the results. We say it a lot here at StageMilk but actors are storytellers and if you want to be the best storyteller you can be, it is vital to understand the basic building blocks of story.

What is narrative structure?

So glad you asked. Okay let’s check out the picture below from Teach Starter: 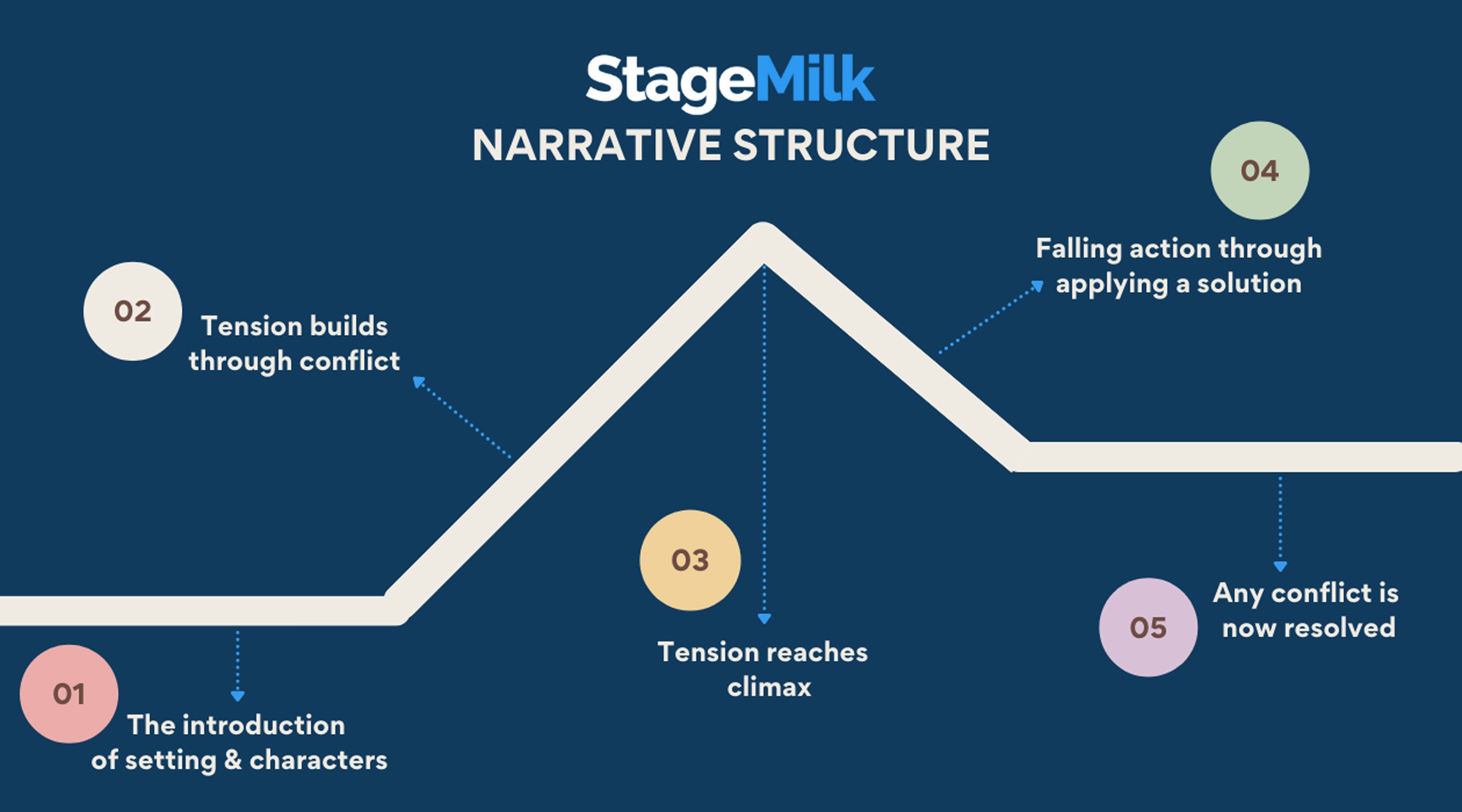 So imagine the vertical axis is about narrative action and the horizontal axis is time. This is how every single story ever told works. There is a character, they want something. They are faced with problems and challenges to get what they want. Eventually it reaches a crisis moment where the character does or says something they cannot come back from, the moment when everything changes, this is the crisis moment. After the crisis the action declines and we have a resolution where the character is irrevocably changed and hopefully has got what they wanted.

The form that takes usually dictates whether we’re looking at comedy or tragedy, at least in the traditional sense, Romeo and Juliet get what they want, they get to be together forever in spite of the odds, the tragedy of the play is that the only way for them to do it, is in death. Two Gentlemen of Verona is a comedy because everyone gets what they want and ends happily ever after with the bad guys in jail and a few hilarious misunderstandings along the way. This is a very basic version of the events here but it gives you an idea of how to think about applying this narrative structure.

Another example. Star Wars: Luke is bored and wants more from his life – orientation. He meets a strange man who tells him about the past, his family is murdered – rising action. Luke confronts Vader – crisis. Death Star destroyed – resolution. Ba-da-bing, ba-da-boom – narrative structure.

How to apply it to your acting:

Right so, now I am going to blow your mind. This exact structure exists not only overarching in every play or script but on a much smaller lever in every scene and sometimes moment to moment and in fact applying this narrative structure in your approach is going to help you tell the story of the scene so much better. So let’s talk through it, look at a scene or a monologue, and really look at what the character is saying at the top of the scene. What is their emotional state? Try and clarify this in two or three words. For an example I am going to use this:

Friday Night Lights Monologue
Coach Gary Gaines:
It’s real simple. You got two more quarters and that’s it. Now most of you have been playing this game for 10 years, and you got two more quarters and after that most of you will never play this game again as long as you live. And you’ve all known me for a while, and for a long time now you’ve been hearing about me talk about being perfect. Well, I want you to understand something. To me, being perfect is not about that scoreboard out there, it’s not about winning. It’s about you, and your relationship to your family, yourself, and your friends. Being perfect is about being able to look your friends in the eye, and know that you didn’t let them down because you told them the truth. And that truth is that you did everything that you could – there wasn’t one more thing that you could have done. Can you live in that moment? As best you can, with clear eyes, and love in your heart. With joy in your heart. If you can do that, then you’re perfect.

At the top what is his emotional state? We are at halftime in an important game – look at the first three sentences – he is being genuine, he is being real, he is telling them the truth. He needs them to understand the reality of their situation. He’s direct and he’s clear and honest. Great – so now we understand the start, now let’s look at the end, how does he end this piece? Look at the last three sentences.

He is inspiring them, he is vulnerable, he is emotional. So we go from clear, direct and honest to inspirational, vulnerable and emotional. When does it change? Where is the crisis moment? I think around “You did everything you could, there wasn’t one more thing you could have done” That is the crisis moment in this scene, the moment where he says what he really means. The action after that is resolution.

So now we know what the orientation of this scene is, where we need to build through the action, where the crisis – the point of no return occurs and where the character ends emotionally. All of a sudden we have plotted the narrative arc of the story here. Now if we really honour that in performance and really commit to telling that story as honestly, venerable and truthfully as possible the scene and the character are really going to come to life! If you ever get a note that you are playing the character as one note, or playing the end of the scene or not allowing yourself to be properly vulnerable – it’s because you haven’t applied this work to its fullest extent.

So there you have it folks, that is basic narrative structure and how to apply it to your next scene or monologue. If you start consciously trying to tell the story of the scene or monologue, making sure you build the action and the tension to that crisis moment and allow that crisis moment to really genuinely affect you I can guarantee you will get more auditions, more call backs and more jobs! After all actors are story-tellers and the better we get at telling stories the more stories we will get the chance to tell! Good luck!

How To Procrastinate With Purpose

Your Success Is More Than Yours