StageMilk / Accents / How to do a British Accent – Fast!

Quick! Grab the tea and terrible weather! It’s time to do a British accent and fast! For the purposes of this article, we’re going to be doing a Southern Standard British accent—a modernised version Received Pronunciation—somewhere in the region of Stephen Fry and David Attenborough.  You see, there are hundreds of regional dialects all around the British Isles, from the hard-nosed, rhotic ‘r’s of Scotland, to the soft ‘t’ of the southern Irish accent, right on down to the fanciest of upper-class English accents, Received Pronunciation, which we are going to practice today!

It is important to know that one does not simply do a perfect accent on the first go. This takes years of work, practice and coaching from experts in your chosen field! Consider this a starting point for how you can make some British accent sounds if you need to work quickly. And remember that if you want to get this really spot on, it’s going to take a lot more work than this!

NOTE: Before you begin any accent work, we always recommend doing a vocal warm-up to really get those articulators working and that breath nice and grounded. 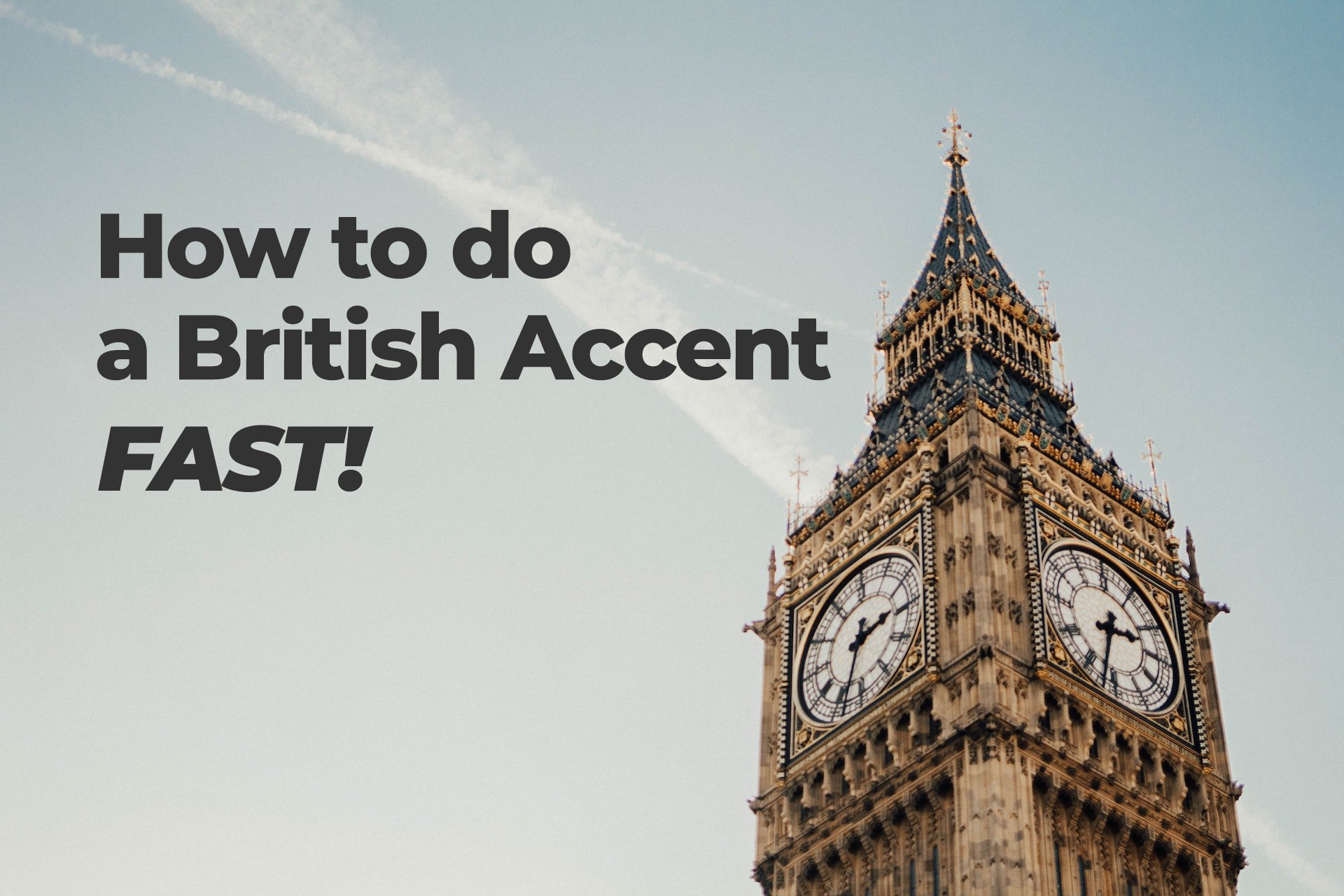 Every accent or dialect has its own unique placement of the jaw, tongue, lips and mouth. This is sometimes referred to as “vocal posture”, and every accent has one. Yes, even yours! If you are able to alter your own default placement and acquire that of another dialect, you should at least be in a similar position where things won’t stand out too badly. It also puts you in the best position to make the sounds of that accent correctly as you learn and practice them.

Now, I should mention at this juncture that I am not a voice coach or a dialect coach, I am merely an Aussie actor with fairly good proficiency in accent work. So I would also say if your voice or dialect coach tells you to do this in a different way, you should listen to them! Again, this is a fast and nasty way of getting to an RP sound.

Imagine that you have an egg in the back of your mouth—sitting on top of the very back of your tongue, you should feel a lot of space in the back of your mouth. Next, think about your upper lip: make it tight and set in stone. Know in your heart that all of the sounds that you make from here on out will use a lot of lip rounding. We want to keep the sound coming forward, with a stiff upper lip and absolutely no width in the mouth. This is not an accent that you smile with, it is an accent that you stoically, bear the universe with.

Finally, take a breath in and really contact your chest resonance. Try and work for a nice baritone sound encapsulating all of that chest power you have. Keep it supported and try and say the following sentence.

‘Absolutely Sir Peter, that is a capital idea.’

You should hopefully sound a little something like this:

How did you go? It may not have been perfect, but like any new skill, it takes time and practice. So keep at it!

Every accent or dialect comes with its own dialectal features which make it unique. This article should be the start of your journey of discovery with RP. This is not an exhaustive list, more of a jumping-off point to put you on the right track! Here are some of the signature sounds for RP that you should keep an eye out for. I give more detail on my source, Paul Meier’s Accents and Dialects for Stage and Screen, below.

Did that sound like gibberish? It’s less complex than you might think. Aspirated means there is a lot of air moving through it, released means we aren’t holding it in and plosive means it is at the front of the mouth exploding outwards as you say it (think the burst of air when you make a sound like “p” or “b”). English RP speakers treat this sound more sharply than almost any other group of English speakers. Some words to think about: Better, Lot of, shatter, motive, etc. Keep those “t” sounds sharp and clear.

Yes, the inexorable question of the short or long ‘a’ sound. The overarching rule here is that if your ‘a’ sound sounds weird … it probably is weird. “Cart”, for example, isn’t going to be right for “cat”, So have a play around with it. “Dance”, for example, needs a longer and more open ‘a’ sound as opposed to the short ‘a’ you would get in General American for the same word.

My general advice would be to experiment with elongating rather than shortening sounds. However, if you are ever confused, check with a pronunciation dictionary or ask a real-life RP speaker. Google Stephen Fry: hear him speak, perform or listen to one of his audiobooks.

If you’re an American, this is going to feel super weird. You want to make the vowel sound in words like “lot” and “cloth” in the back of your mouth, rather than the front—and with lots of lip rounding. You may feel very silly, but give it a go! “Knowledge”, “collar”, “want”, “fox” are all good practice words.

This is very tricky, especially for Americans. What if I told you that RP speakers may not say every ‘r’ in a word as written, but will also occasionally add an ‘r’ sound where there is not one written? Wild, right? For example, an RP speaker would say “library” as “li-bry”, as opposed to a General American speaker who would say “li-bra-ry”.

At the same time, an RP speaker would say the phrase “here is” as: “here-r-is” using an ‘r’ sound to link the flow of one word into another. The American speaker would pronounce these words as two separate sounds. The reason for this difference goes deep into the weeds linguistics-wise—which is a fascinating deep-dive if that’s your thing. But all you need to know as a starting point is there is a small linking ‘r’ sound in these words and phrases: “there are”, “her eyes”, “fear of”, etc. (This is one you might want to work on with a voice coach, it can get a little tricky! )

#1 Don’t get too fancy! Listen: it’s not 1932 and you are not Katherine Hepburn. I know, I know, I wish I was too… But at the end of the day we are going for a more modern approach, here, so record yourself on your phone and listen to yourself! If you sound like Kate McKinnon in the video below, keep practising!

#2 Those nasty ‘r’s. If you have a rhotic dialect, yourself (such as an American accent), you are going to find it very tricky to drop it. ‘R’s and ‘L’s are arguably the toughest sounds to deal with as an English speaker. I would highly recommend you seek out a voice coach to give you a hand on this front if you’re struggling.

#3 Emphasis: Remember that the RP speaker tends to emphasise fewer words in a sentence than an American. Also, usually, they use a higher pitch to show the significance of certain words, rather than more volume like you would see an American do.

You can hear how he emphasises the word “Princeton” not with volume, but with a slightly higher pitch. Going the other way will give you away as a non-RP speaker!

In my humble opinion, there is one person who stands head and shoulders above the rest when it comes to teaching dialects in book form. His name is Paul Meier and his book Accents and Dialects for Stage and Screen is absolutely fantastic. I will mention at this stage I am not endorsed by Paul and neither is StageMilk. His book is simply the best resource for learning dialects that I have come across. He goes through each signature sound of an accent, builds it into words and from words into full monologues. He also runs the this website which stores audio recordings of real-life dialect speakers and allows you to practice saying what they do. It is a really wonderful resource and you should check it out.

All of these come from Paul Meier’s excellent book. Try the following sentences in your new RP accent!

You can listen to me have a go at them here:

As you can hear, I am not quite perfect, but I am working on this accent all the time and I hope this inspires you to do the same!

There you have it, folks: a rapid rundown of the RP accent! As you can see, it isn’t as simple as just barging in! Any accent takes a lot of work, practice, repetition and is best done under the supervision of a great dialect coach. Google great dialect teachers in your area. In my humble opinion, Linda Nichols-Gidley at Voco Vox is one of the best in Australia, as well as Amanda Mitchell, Paige Walker and Felicity Jurd. But there are many others around the world who can help you achieve your dialect dreams!

If you want to practice working in accents with StageMilk, check out our online scene club where you can work on scenes and monologues every month with great actors and coaches from around the globe!

How to do a General American Accent

Do you have to master an accent for the first audition?