How to Market a Theatre Show | Selling a Theatre Production 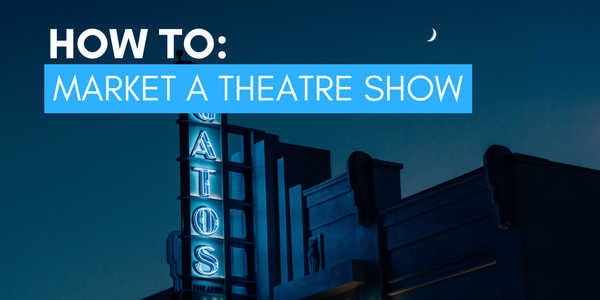 You’ve got the show ready. The show’s good. Good cast, good play, good times. But if you haven’t flaunted what you’ve got, not just to your mates and the usuals, but to the larger community, you’ll be out of praise and probably out of pocket. Independent productions can often mean you’re limited on money and you’re limited on resources, but there’s no reason you can’t market your show to look as if it’s just come off Broadway. All it takes is a little bit of persistence and innovation.

Use What You Got

Obvious up first: make sure the show’s worth flogging. You can totally get away with marketing the s**t out of a s**t show, but once that first review goes up, you’re gonna lose a lot of people.

Work hard on the show and it’ll be way to easier to get those numbers in. Think about the best thing your show offers and stack it up against what it doesn’t have.

For example, if your show is a seventy minute rollercoaster of farcical comedy with not a shred of drama or issue-based commentary in it, take it in your stride. Promote it a way that taps into “entertainment for entertainment’s sake”, for example. Alternatively, an issue-based drama focussing on something topical, let’s say, terrorism, can be marketed as just that; “relevant”, “real”, “topical”, “hits a nerve”. If it’s new, focus on the fact that its “new work”, “never seen before”, “a staggering debut”, and if it’s old, “the world-renowned work”, “the play that keeps on giving”, “the classic”, etc. There is always a way to spin the context of your play to make it seem exciting.

Use your creatives. Have they been in something of note recently? Have they worked extensively with a professional theatre company? Are there names attached to other projects of which you can promote? People follow writers, directors and particularly actors, even in the independent scene. Using the CVs of those involved in your show can be a good way to get people interested to see your show, perhaps regardless of the show itself. Quips such as “As seen in….” or “From the same director who brought you…” are good lines to shove on your posters or social media presence.

If the production company you’re producing with has a good track record, use it. Lots of companies have a certain brand of shows. While varying in content, they may have a certain taste that keeps coming back in each production. Again, using “From the company that brought you…” or “CatMouse Productions are back at it” is a clear indicator that your company has a track record and that this isn’t some random one-time-only feat.

Everyone knows how to use social media now. So much so that you’d be stupid not to utilise it. That being said, it’s easy to get a bit trigger happy once you have assets to flog, and flood the world with your show as if you’re the new Trump. Don’t be Trump.

Be meticulous and careful about when, why and how you’re posting. Don’t start too early. If your show is two months out, no one wants to see an onslaught of images, interviews and whatever you have up until opening night. It’s a good idea to have a preliminary design, perhaps something mysterious or simple, in the vein of “coming soon…” or “Stay tuned for…” a while out. But that’s all you need. Focus your energy into making a good show, and preparing for your considered and measured social media campaign closer in.

So when is closer in? This may depend on how long your season is. If your show is going for a month or more, you’re going to have plenty of time within your season to promote the heck out of your show. Don’t fatigue everyone too early. Also remember that production stills are a MASSIVE key in stepping up your campaign, so you can wait for those to roll in.

If it’s a shorter season, say two weeks, you can afford to start promoting two weeks or so out. Start with The Big Post. This is the first graphic/poster/text your followers should see about your show, and it should have everything. When it’s on, how much tickets are, who’s involved, and why it’s worth seeing. Tag everyone involved, tag the venue, tag tag tag.

A good timeline to have in mind is: images/posters > introduction of creatives > media/interviews > trailer > production stills > shows being sold the f**k out.

If you want a great example of social media check us out.

With the rise of social media has seen the rise of the short video. A bloody easy and smart way to promote your show. Your trailer is going to be different depending on your show. For the lighthearted or comedic productions, a funny short clip is always the way to go.

It should be simple, introduce the characters, and leave you wanting to know what’s next. The same can be done for more serious dramas, though many companies opt for a stylised interview with a director or writer, for example. These can work too, but they can’t be too long or too boring. Generally, it’s best to go for a short, sharp, written trailer. Given that Instagram videos have a limit of sixty seconds, make sure your video is underneath a minute so that you can use the same one across most platforms.

Use A Back Scratcher

Your competition is also your greatest tool. Scratch their backs and get yours scratched. Hit up other independent companies, particularly through their online platforms, and get a relationship going whereby you share each others’ posts and images. Developing these relationships can result in ticket deals and cross-posting, both of which are a massive boost for sales. Share resources and insider knowledge and hopefully you’ll end up sharing audiences as well.

This doesn’t just go for other companies and producers. If the theatre you’re performing at has a local cafe or pub, get a ticket deal going there. You bring people in, they bring people in. Beautiful. Independent theatre can be a hard-slog, and even harder when you don’t have relationships around you to help you out.

Let’s approach this by assuming you’re the average producer doing indie theatre. Meaning, money isn’t something you can be wasting. Using your budget for promotion cleverly can save you a lot of money given that it’s also the way in which you make money. First of all, don’t go crazy with your posters and flyers. As discussed above, social media is the faster and more realistic way in which people are accessing information about what’s on in their community.

Plastering up A3 posters all over town ain’t going to get you that many more bums on seats. Particularly if your show is aimed at a younger audience. That being said, it’s neither clever to completely write it off. Print ‘em, but be conscious of where you’re placing them. Understand who your target audience is and source out their local hide-outs. If your show’s about music, hit up bars and gig venues. If it’s an old classic, hit up art galleries or other art venues. If it’s about drugs hit up…just tell your mates.

For every dollar you don’t spend on print, spend on social. Sponsored posts go a far way in reach, and you can tailor that reach to the demographic that you want. It’s relatively cheap as well.

As stated above, indie theatre isn’t always going to pay the rent. Every dollar you save can go into making your show better and paying the people that make your show as good as it is.

Don’t use your girlfriend. But politely ask your partner, friends, family, whoever, to spread the word. It’s an obvious thing, but word of mouth is a powerful marketing strategy, and it works. Whether it’s a matter of sharing it online or getting your mates to make a night out of it, getting those around you excited and involved in your show can sell you some tickets. Don’t go crazy with comps, but if giving your partner a comp means that they’ll bring their friends from work, or that they’ll break the ice of their swingers party by stopping in at the theatre, then it’s worth copping the price of one ticket.

To sum up, indie theatre can be a hard flog. But if you use what you have resourcefully and carefully, making what could be an amateur show into a fully fledged professional production isn’t as hard as it seems. Be confident, but cautious. The main point to remember is a good show deserves to be seen. Make your show good, and therefore worth the effort of marketing it.

How to Improve your Voice in 30 Seconds

One response to “How to Market a Theatre Show”