What you can learn from Iain Sinclair | StageMilk

StageMilk / Acting Tips / What you can learn from Iain Sinclair 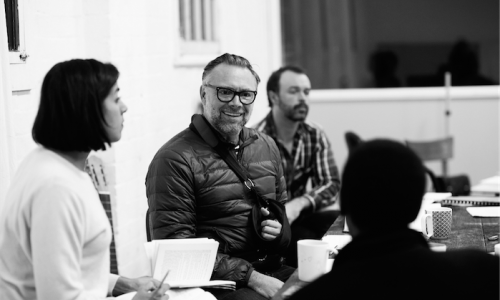 I was first introduced to director Iain Sinclair’s work in a Griffin production in 2005, my first year of drama school.
It was one of those last-minute ticket deals you get at the reception of your school, which the students flock to and fight for, like it was the last pot noodle on the shelf. It was indoctrinated into us by head-acting-teacher-at-the-time, Kevin Jackson, that if we didn’t take our last $4.75 and use it to schlep into Kings Cross on a school night for the consumption of art at the expense of a hot meal……then, in his eyes, we were shit humans and not worthy of the craft.

My mate and I were just not up for the theatre on this particular evening. I was buried deep in the midst of some Mickey-Mouse, first-year assessment called ‘The Sleeping Partner Exercise’, which at the time I was endowing with the significance of Lear. My mate was in second year – Chekhov-land – where he and other 22-year-olds were peacocking around twiddling their moustaches and giving vacuous line-readings about the samovar.

Needless to say, we were very serious young men. And our minds were elsewhere.

But something happened. The play was David Rabe’s Hurlyburly (a howler of a script) and the show was electric. We sat up in our chairs. We didn’t know why. There were no immediately obvious, radical directorial choices being showboated. There was no drastic re-imagining of context, no abstract movement sequences, and not one person smeared faeces along a perspex-box enclosure. Not one. But the show was elemental and taut and connected in a way that felt unrivalled in all the interplay I’d seen between actors onstage before. Whatever was so remarkable that night was invisible. The direction wasn’t on show, the play was.

And that’s Iain for you.

Fast-forwarding many years on, many kilos, and a hairline which calls to mind Bruce Willis in the latter outings of the Die Hard franchise – I’ve been privileged to be on the inside of the Iain Sinclair machine many times now. And I know exactly why I felt the way I did watching Hurlyburly at the Stables that night, and every production of Iain’s since.

Iain’s approach is the best possible amalgamation of modern and ancient. His work is menacing, savage, tender, wildly unpredictable…but also rooted in the most sturdy, old-school technique and foundation. There is an understanding from Iain that the text is a mechanism, made up of smaller mechanisms – small gifts for him to unlock so he can deliver the thing that he holds most dear…the play. Particularly when he’s working with the greats. And more often than not, he is. Iain doesn’t deliver his ego. He delivers great plays. Regularly.

So. What’s his vibe?

It’s an honouring of every word on the page. It’s an innate understanding of genre. It’s his favouring of purity and restraint over excess. It’s his grilling of Australian actors for taking every significant piece of text and rendering it insignificant by dropping off at the end of every goddamn line. This is a biggy for Iain, particularly with American drama. Because the Americans, generally speaking, really finish their sentences. We often do not. ‘Falling tone’, he calls this habit, and these two words are littered throughout Iain Sinclair notes sessions – used so often that they’re inevitably shortened to the acronym ‘FT’ (and it really starts to sting once the acronym is introduced). I’m a shocker culprit for this – being a dismissive, stoic country boy. And I don’t think there’s an actor who, after having worked with Iain, doesn’t wake up in the middle of the night in a white sweat, jabbering the words ‘falling tone’ like some poor bastard with a disorder.

Iain will not let up on this. He will drill you and drill you and drill you until you give him what the text requires.
Now, if this kind of firm directorial ownership of the text is starting to sound a little overbearing……well, perhaps it’s not for you. But it’s this level of scrutiny that takes a show from ‘strong’, to transcendent. Yes, it can be sometimes mathematical in the approach, but bone-shattering in the effect. Otherwise we’d get up there and shrug, deflect and casualise the drama completely in our bid to be naturalistic. But by keeping each line of text UP, alive and in-the-air with forward energy – this is what creates that vital electricity that I witnessed onstage in Hurlyburly. This might sound obvious, but is so rarely enforced. When people watch an Iain Sinclair production, they take its brilliance for granted. They aren’t aware of the sheer technique and foundation in place.

The man is hard on actors. But I’ve learnt in all our years of collaboration, the more he reams me – the more he loves me. It’s the greatest compliment Iain can give……a good old-fashioned reaming. I think misplaced pride too often makes an actor averse to a bit of tough love. But when you get the real thing it’s a liberating moment, because it’s actually what you look for in every rehearsal room you ever set foot in. Not a director who mollycoddles you and breaks for lunch early because the morning was ‘fab’, but someone who inspires, terrifies and occasionally shits you in equal measure – in the very same way you felt when you encountered that first story that made you want to do this whole damn storytelling thing in the first place.

The coolest thing I have gotten from my time with Iain:
To work on golden-age American drama with Iain is akin to sitting politely with a pig as it bathes itself in shit. Exhaustive though his talents may be, I believe this is his happy place. Not only are they some of the most exquisite stories put on a stage, but their immaculate craftsmanship perfectly suits Iain’s surgical attention to text. Specifically, I’ve been blessed to work on a decent chunk of Arthur Miller with the man. What is so satisfying about working on this material with Iain is that, while these stories have a naturalistic context, the echoes and shapes of Greek Tragedy abound through these plays and Miller’s haunting poetry – which somehow does an effortless dance with everyday talk and cadences. It is heightened realism. Iain knows this well, and it is imbued in how he works with the actors.

It’s about paring back anything casual or indirect and keeping everything at its most streamlined and potent. Every thought and relationship is necessary and required. There are classical archetypes in Miller and, as an actor, you can find grand shapes and make choices that are Shakespearean in size. A pure, striking choice will beat deflective, naturalistic posturing and mumbling any day of the week. Because you break the drama with every single arbitrary physical choice you make. You literally throw the story into the floor. Iain finds the operatic in the everyday, which is exactly what Miller asks of us.

Now, I’ve wanked on a bit……but this rule can inform any story if we allow it to. Whether it’s Edward Albee or a Nando’s commercial – the discipline can remain the same.
I remember, not long after working on Of Mice and Men with Iain (where he ABSOLUTELY TORE ME A FRESH ONE), I worked with him on a Nick Enright play later that year, set in a small country town in rural Australia. ‘This is beautiful!’ I thought to myself, ‘I’M a country boy! I’m gonna dismiss and mumble and drop off at the end of every bloody line! It’ll be authentic as all get out!’

Did this fly? No. No it did not. Iain demanded the same scale of this intimate Australian story that he would of Oedipus. He said at one point ‘If we Summer Bay this thing, we kill it’ (That’s a really good line, by the way). Naturalism is often very appealing……but it appeals because it’s safe.

See what happens when you lift things a little and traverse some greater heights that challenge and scare you. Because you’ll find it’s the reason you got into the whole thing in the first place. We can be dismissive and casual every day of our lives, but in the theatre Iain pushes you to go somewhere far, far greater.

Anthony is a NIDA graduate and Sydney Theatre Award winner who has performed extensively in theatre for Belvoir, STC, Ensemble, Griffin, Sport for Jove, Hayes Theatre, The Comedy Theatre, Arts Centre Melbourne and more. Anthony also directs for theatre. He will soon be seen in the feature Buckley’s Chance alongside Bill Nighy.

Anthony is a NIDA graduate and Sydney Theatre Award winner who has performed extensively in theatre for Belvoir, STC, Ensemble, Griffin, Sport for Jove, Hayes Theatre, The Comedy Theatre, Arts Centre Melbourne and more. Anthony also directs for theatre. He will soon be seen in the feature Buckley’s Chance alongside Bill Nighy.

What to expect at a commercial audition