Write Your Way Out: Why Hamilton’s Unconventional Formula Works

StageMilk / Must Read Articles! / Write Your Way Out: Why Hamilton’s Unconventional Formula Works

My first interaction with the hit musical Hamilton was a skeptical one. Seated at a long table in a Thai restaurant in Sydney, a friend of mine, a composer, leaned over and poured me a full glass of thin wine.

“Hey, you like hip hop yeah?” he asked. “There’s this rap musical that’s come out, all about the American Revolution. I think you’d like it”.

Full of booze and bluster, I said I’d check it out. I didn’t. It was only until a week later, when another friend pitched me the exact same line that I figured it was worth a spin. After all, I do like hip-hop. And I do like musicals. And I was a history major, once upon a time. But it seemed a bit like dipping a chocolate cookie in orange juice; the elements are good individually but together are a crime against humanity.

So one lazy Friday in December, when everyone in the office is paddling towards the weekend, I found the soundtrack on Apple Music, started at the first track, and began answering emails. By the time I was halfway through the first act, I was hooked. And as proof, here’s the text exchange between my sister and I: 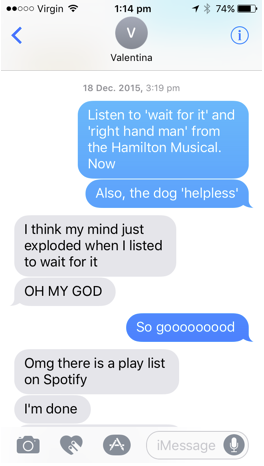 Also, that was meant to be ‘song’, not ‘dog’. Thanks fat fingers.

In short, I was hooked. And I wasn’t alone. Hamilton has made creator Lin-Manuel Miranda a millionaire at 36. President Obama says the show’s greatness is the only thing he and Dick Cheney agree on. It’s already opened in 4 different locations, all of which are completely sold out. It’s a hit unlike any in modern memory, seemingly spanning political, racial and social divides (if not economic ones – seriously, check out the resale prices. They’ll make you want to punch the bursar).

But why has this happened? Not just for me, but for so many people. What is it about a hip-hop musical about America’s first Treasury Secretary, starring predominately actors of colour, that has captured the hearts and minds of not only Americans but people all across the globe? How does this Frankenstein live?

Much of the musical’s success is down to Miranda’s sheer talent, craft and conviction. There’s no denying that. But if we unpack Hamilton’s core concept, there are reasons why Miranda made sure he did not throw away his shot.

First, let’s discuss the decision to use hip-hop as the musical’s key artistic medium. As Miranda explains, he chose it because it’s the language of revolution in our time, so it made perfect sense to tell America’s Revolution of 1776 through the same craft. Furthermore, the musical’s protagonist, Alexander Hamilton, was a penniless immigrant from the Caribbean who became pivotal in shaping the fledgling nation. To Miranda, this was the quintessential American narrative. “This is Tupac”, he says. “This is Biggie”.

President Obama says the show’s greatness is the only thing he and Dick Cheney agree on.

But that doesn’t mean he’s right. After all, as a songwriter, he doesn’t have the authenticity of voice of a Tupac or Biggie. His father was an immigrant, sure, but he was a senior adviser to New York’s mayor. Hardly screams ‘the struggle’. And if he did try imitating these artists, you can bet that his musical wouldn’t have traveled as far as it has.

But I would argue that Hamilton is not written as a piece of hip hop but rather a homage to hip hop. Its written by a fan, a scholar. The entire score is littered with as many rap references as it is original rhymes and flow. It’s someone broadcasting their love of the art form – a kid putting on his favourite records and dancing around to them, just like we might. And that’s the important part; Miranda has not only tapped into our generation’s love of hip-hop but has done so, consciously or not, from our mainstream, privileged perspective.

This brings with it an inherent risk – even problem – about how non-black, affluent societies consume black culture. Everyone who loves hip hop as a product and not a hustle should be aware of that duality.

So we now have the founding fathers of America – all of who are white, straight, slave-owning men – rapping. Yay.

This is where the importance of casting comes into play. In any official production of Hamilton, people of colour must play all principle roles. All of them. It’s mandated in the character descriptions, a move that is virtually unheard of in such a smash musical. In the original Broadway cast of Hamilton, George Washington is black. Hamilton is Dominican Republican. His wife, Eliza Hamilton, is Asian American. . Thomas Jefferson is not only black but also sports an enormous afro.

This has several follow on effects that mitigate the inherent problem of having a rap musical about those who sought to control black voices and bodies. Firstly, Broadway, like any artistic space, has an overrepresentation of white leads. The same goes for history. By casting people of colour in the principle roles Hamilton corrects both a historical and current imbalance.

Secondly, this choice subverts the traditional telling of America’s founding and makes us consider the nation’s slave-owning past whether we want to or not. Thirdly, by casting such prominent figures as non-white, Miranda not only celebrates America’s diversity but also gives people of colour a visible stake in the founding of their nation. And for us white progressives out there, it eases the guilt we feel when we pop on the latest Vince Staples record and slurp down a morning cappuccino.

But there’s one final, third act to the concept that helps immeasurably – Hamilton glorifies America. It would have been easy to do the opposite; America’s ‘revolution’ was essentially a gaggle of wealthy landowners who got together and decided that they didn’t want to pay tax anymore. Hardly a populist uprising.

But Washington is portrayed as a strong, wise general. Burr and Jefferson, chief antagonists in the piece, are complex and brilliant. The nation they forge together, despite their disagreements, is the toast of the narrative – of the world. Everyone works tirelessly towards it, black and white alike. Hamilton seeks to showcase the best the United States has to offer, in all its heavy faults and ruthless idealism.

Whether we like them or not, the entire world looks to the American people in one way or another. When someone can show us that place’s best and brightest self, we can’t help but look longer.

Kristian works for Greenpeace Australia Pacific. He writes comedy for the Chaser Quarterly, listens to Hamilton and watches sports.

Special thanks to Holly Simpkin for her help on this article.

works for Greenpeace Australia Pacific. He writes comedy for the Chaser Quarterly, listens to Hamilton and watches sports

works for Greenpeace Australia Pacific. He writes comedy for the Chaser Quarterly, listens to Hamilton and watches sports

5 Things I Learnt as an Actor When I Started Directing