#1 There is only one you

This is a great lesson to get onto early. After I first left drama school, I decided I needed to fit a certain mould. I changed my hair, had an ‘audition wardrobe’ with clothes I wouldn’t usually wear, and I gave casting directors what I thought they wanted from me. How many roles did I land? ZERO.

Too often early career actors try and emulate another, more famous actor, or change their style to fit into a mould that they think they belong to. This is a huge mistake. Say you are lucky enough look like Margo Robbie. Say you can act like Margo Robbie too, and you smash it in the audition room. You know who’s going to get that role ahead of you? Margo Robbie. Because she is the original and you are the copy.

Trends change all the time, and different body types, styles or personalities come in and out of vogue. So just be you, and wait for that role that suits YOU. Once you land that one, who knows what else may come? If you are too busy being someone else, you are going to miss that opportunity for you to do what you’re best at: being you.

#2 Don’t get hung up on transformational acting

Got to be a character, got to be transformational, got to be different, got to be the next Daniel Day Lewis or Meryl Streep. Because acting is being someone different to yourself. Well, Maybe think again.

Don’t get me wrong, there is still room for transformational actors (usually later in career or on stage) but more often than not, you are cast because you look the part, and your natural energy is right. This is particularly true for the smaller roles in TV and film. Don’t go method on “Policeman No. 2” or “Real Estate Agent”, just be present and say the lines, do a good job and wait for the next call. Trying to do too much can sabotage a small role and potentially annoy the team around you, at worst, you’ll end up being edited out. Save the Oscar winning performance for when you have the support, time, director and money to pull it off.

All actors get nerves. Don’t worry about them!

For some actors they are crippling, and for others it’s just a flutter. The key is accepting that they are going to happen, and getting on with the job. Work out a plan to deal with them so that if they get too much, you are always prepared for them. Sports people suffer from the same problems, but often they convert that nervous energy into useful energy. Try to reframe the way you look at nerves. being nervous means you want to succeed, it means you care, it means you’re excited. They don’t mean you are going to forget the first line!

And always remeber, you are not alone!

Read more: How to Deal with Audition Nerves

There is nothing worse than giving nothing because “you weren’t told to do anything”. Whether it’s film, TV or stage, you should be continuously making offers in performance. Your performance should be a collaboration between yourself and the director, and if you are giving nothing, or just continuously doing the same thing, you are not doing your job.

Don’t worry about getting things ‘wrong’. A director is interested in the final product, and time is set aside for experimentation in rehearsals and takes, so provide a spectrum of possibilities so the director can choose the best one for the end product, rather then the only one.

#5 Everyone wants you to be the one

This one probably took the longest for me to learn. Nobody hates you, and everybody wants you to succeed. Whether you are in a casting room, or you’ve already got the gig and are in rehearsals or on set, know that everybody wants you to do the best job you can. The casting agents want you to be right for the role, because then they get credit for finding you. The director cast you because they already thought you were right for the role. The audience is there watching you because they are excited to see the story. Know that everyone is in your corner.

It is a weird persecution complex performers have to think that people aren’t interested in you, or that audiences hate you or directors are sick of you. Everyone is working with you, and auditioning you and watching you by choice, so focus on that positive, rather then dwelling on fictitious negative perceptions. This simple adjustment of thinking can have massive effects of your creative productivity.

Don’t pretend you don’t want it. Anyone, in any job, wants to be at the top of it, wants to be the best at it, and acting is no different. Just with acting, if you’re at the top, everybody knows your name.

It’s fine to want it, we all do, but don’t have this be the end goal. Being a household name is not a measure of success. Paying your rent and covering living costs is a massive achievement in an industry which has one of the highest levels of unemployment. There are hundreds if not thousands of actors who are making a comfortable living that you have never heard of and may never have seen, and the ones you can name make up a very small percentage of working actors. Let this be your first goal: making a living from your art. Let the fame come later. 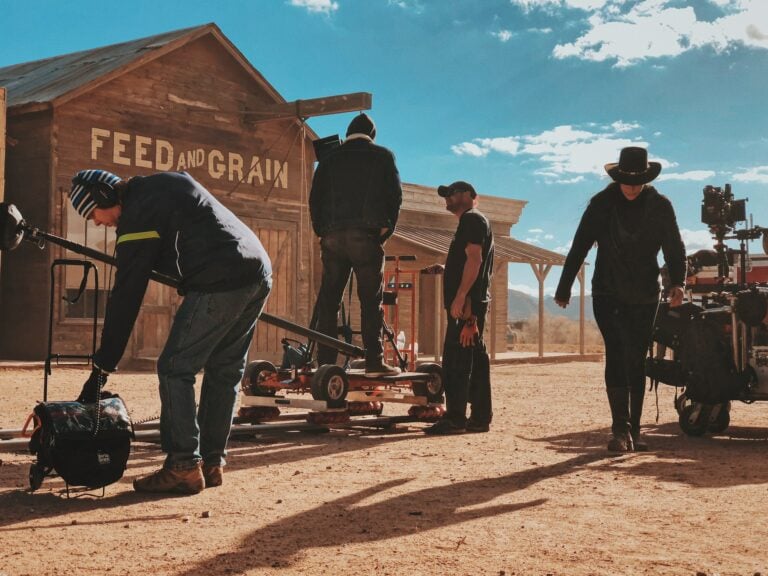 One of the biggest mistakes I see people make is segregating themselves from their acting community because of jealousy, envy, or because they “hate networking”. You don’t have to be the extraverted schmoozer to be part of the community, and you shouldn’t only be sucking up to the people who will get you work, as people see through this immediately.

Instead, look at it like a support network. Just being supportive and in contact with the wider community can keep you grounded and up to date with what is happening in the industry. Also, having a group of like minded people to discuss ideas with, or share audition horror stories with, or ask questions to, can keep you afloat and keep you inspired.

You can’t do it alone! The arts community is a very close knit community, and embracing it can become hugely beneficial to your career. Support your fellow artists and they will support you. Go to shows, see their films, go to events, and watch as they return the favour.

#8 Your voice is really important

If you’re going to work on one thing, work on your voice. So many people spend all their extra time at the gym as a way of “working on their acting”. Fair enough, if you look good, you may get that role, but if you sound like a turkey, you absolutely won’t.

Doing daily voice exercises and avoiding damage can bring out beautiful tones and versatility, which in turn makes your voice a desirable asset to a production. Your voice can be trained and developed, so if you want a particular timbre, you can work towards that with the right exercises and diligence. Have a look at some old BBC actors, and hear how incredible their voices are to listen too, and I can guarantee that what you are hearing is work, not genetics.

As well as just sounding great on film or stage, voice-overs are a very lucrative side to the acting industry, something I wish I had have known earlier. Put in the work, get your voice sounding good, and start making money between gigs as a voice-over artist, rather than as a barista.

The final lesson for today, and probably the most important.

For most of us, acting started as a hobby at school or uni, it was something we did for the sheer enjoyment. That’s great, and a wonderful way to begin.

But if we want it to be a job, it can’t be a hobby. If you fill your life with acting: as a hobby, as relaxation through binge-watching, and as a job, I can almost guarantee you will be looking to start your accounting or IT degree within 12 months. It’s too much, and you will burn out, no exceptions. This almost happened to me, because I made the mistake of thinking that it should take up 100% of my life if I was serious.

If you want acting to be your job, you must treat it like work, which means you need hours to work in, days off and a plan. It also means you need a hobby!

Find something you love that has nothing to do with acting. Watching TV doesn’t count, as believe it or not, your brain will still be analysing performance. Play a sport, start gaming, do yoga, collect stamps, whatever it is, give yourself an outlet that is for the pure joy (you know how acting used to be) so that you can rest and recharge between auditions, shows or gigs.

Chasing authenticity in your career, life and performance

How to have an acting career without going to drama school

One response to “9 Acting Lessons I Learnt Too Late”