StageMilk / Acting Tips / How to Cry on Cue

There’s nothing more terrifying for a nervous actor to hear than: “… and then I want you to cry.” What if you blank? What if it doesn’t happen? What if you can’t just squeeze that iconic single tear? It’s a horrible prospect and a genuine point of anxiety for many actors. Luckily, there are many different techniques you can employ to help you overcome this sometimes-difficult hurdle. So let’s take a closer look at how to cry on cue.

How to Cry on Cue as an Actor Contents:

Is Crying On Cue a Talent?

After working with hundreds of actors as both a peer and as a teacher, I have come to see that some actors do have better access to tears than others. While it might be a stretch to call crying on cue a talent, it is an ability that some find a little easier to perform. For me, it has never come easily. And while that has been frustrating at times, it’s also meant that I have had to work harder—and be even more connected to character and text—if I ever wish to reach the point of tears in a scene.

All that being said, I don’t believe it is a “talent” that should be praised in the way it often is by the general public. Most actors, in the right role, at the right moment, can find the connection and emotion needed to create compelling work. The ability to instantly cry on cue is not in itself something that should be praised: tears are no guarantee that a performance is genuine.

Is Being Able to Cry On Cue Important for Actors? 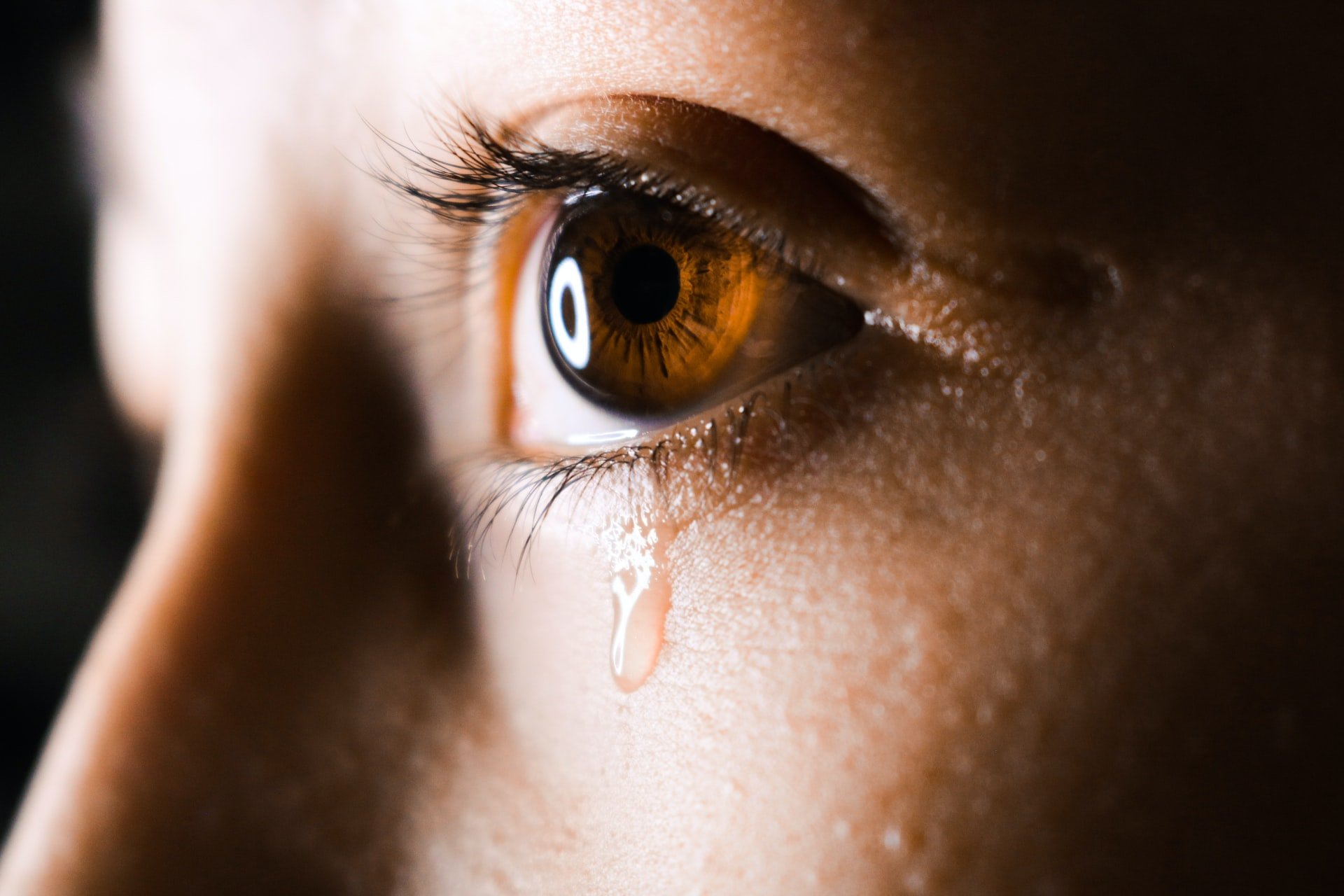 As a general rule, a director who knows what they’re doing won’t force an actor to cry. They will trust that humans don’t react to emotional stimuli in a predictable way, and asking for one specific reaction to that stimuli is a limiting way to look at a scene. Even if the script calls for crying directly, a good director will understand that an actor’s connection with the emotional arc of their character should trump whatever a writer has conjured up in their head. Most will find a different way to express grief—in a way that maintains the integrity of the actor’s performance.

If you are confident in your research, you know your character back to front before stepping on set, you’re fully embodying your character in that moment and yet tears still don’t well up … then that’s okay! In life, we are often trying not to cry in emotional scenarios; therefore, repressing tears is often the more genuine and interesting option than a simple emotional release.

As long as you are still finding the truth and connection to the scene, tears really aren’t that important. So don’t sweat it if a hyper-dramatic image escapes you. If you are so focused on the physical action of crying that your performance loses integrity, then it won’t matter how miserable you look anyway. Stick to the truth of the scene: don’t allow yourself to judge yourself or your character if tears don’t come. The worst thing you can do in this situation is neither cry nor deliver a good performance.

These situations and many others will inevitably occur as an actor, so it can be helpful to investigate some tools and techniques to help us cry on cue.  Crying is a physical response that can be developed by muscle memory and other tools.

Steps to Crying On Cue:

There isn’t anything that will hold back those tears like stress. It’s not magic. It’s not a high concept. Relax and trust that your body will be there for you. Deep breathing can really help to put your body in an open, and vulnerable, emotional state. If you have a big crying moment coming up on set or in the next scene on stage, get yourself in a relaxed state. I personally find meditation one of the best ways to get grounded and relaxed.

Read: Relieving Stress As An Actor

We recently did an interview with actor Damon Herriman, one of the leading actors of our generation. I asked him about how to cry on cue and was surprised by his response: his process was all about music! Before a big crying scene, he would listen to a playlist of the saddest music he had. He found spending some reflective time listening to music allowed the tears to flow much more easily.

This is vital in your prep work. Have an image of where you are, who you’re with and where you have come from. Immerse yourself in the world and repeat this as often as you can. If the world around you is real to you, you will be more comfortable letting yourself go when it comes to that crucial moment.

Mining your own life can be a precarious approach. I am not an acting teacher who often recommends drawing too heavily from intense and triggering events in your past. However, I must say that I have personally used sad and difficult memories from my own life to help me connect if a director is asking for a moment of tears and the scene itself hasn’t allowed me to get there. This kind of work is usually referred to as “emotional recall”, and is often associated with the early work of Stanislavski and some tenets of method acting.

Anthony Brandon Wong, an incredible actor and acting teacher, has spoken about working through emotional exercises to practice these kinds of heightened emotions. For instance, he will do acting exercises where he will imagine saying goodbye to a loved one or a similar scenario. Really live in the moment and let yourself be affected by the situations. Be cautious working with these kinds of exercises, as they can become overwhelming if you do them too often. But crying is a skill like anything else, and can be developed.

While it’s nice to romanticise that the moment will be more organic and raw if you’re flying by the seat of your pants, that won’t help you unless you have supreme confidence in your ability to cry on cue. In which case, you can stop reading now.

There is no mysticism, it’s just another beat in the script, and you should treat it as such. Drill that moment like you’d drill a difficult note in a song until you can hit it every time. The more you know about the script the more freedom and relaxation you will have to reach the emotional climax.

One thing I’d strongly recommend is giving yourself a serious runway if you are hoping to fly off into the blue skies of Hollywood tears! Usually, tears will happen near the end of a scene or monologue so do whatever you need to do to build to that moment. If you are shooting in isolation, see if you can do some improvisation or run some lines to help you get into the zone.

This is another reason to supplement your screen work with theatre work. Theatre scenes allow you a run-up to moments like these without the stressful time limit between “Action!” and “Cut!”, so practice with some stage scenes first. If you can’t get on stage, practise monologues. Let yourself get into the flow of a scene and let the world around you settle … and repeat with precision. Crying on cue is a skill that you can develop, as long as you relax, imagine, and practise.

And Come Down Safely

Finally: whatever your tactic for crying on cue might be, give yourself plenty of time after you finish the scene to come out of that mental/emotional/physical space. We’ve talked elsewhere on this site about the importance of getting out of character to keep yourself well and healthy after a challenging or difficult role. After a scene that requires you to exert yourself to the point of tears, be kind to yourself.

Tricks to Crying On Cue For Actors

So what happens if, after all of this, you still can’t eke out a tear? Well, there are some Hollywood tricks out there, but I must say I DO NOT RECOMMEND ANY OF THESE. A quick Google on the subject will return a multitude of silly ‘hacks’: from onions under the eyes, to just not blinking for five minutes. If the success of your acting is based on using tricks like these, then you need to have an honest look at the kind of actor you wish to be.

Crying should be an organic, natural by-product of a scene. It shouldn’t ever be done in a way that is mechanical or forceful. If you are asked to cry on cue, hopefully, some of these techniques will help; but at the end of the day, you just have to give yourself everything you need to feel comfortable and relaxed. Don’t be afraid to speak up on set and tell the director or other actors what you need. And remember if you really connect to the scene and don’t end up crying, you may still be able to make the director happy.

How to Work with a Difficult Director

How to tackle your acting career in 2019

Tips to Tackle any Scene