We always encourage actors to use theatre monologues for auditions. There is a stigma around auditioning using a movie monologue, and so generally it isn’t done. I think this is because alongside any monologue is usually a well known performance. How can you perform a monologue from Good Will Hunting, without Robin Williams springing to mind, or Erin Brockovich without being compared to the iconic Julia Roberts. You don’t want a director or casting director looking at you and thinking of the original.

It’s a problem. And it’s a problem that can’t be solved by performing it like the original. Mimicry is the enemy of good acting, and good art. You want to be original and show your unique approach to a script. You want to give it your own flair.

But just because these great monologues have been performed by some of the best actors of all time, does that mean we should ignore the slew of incredible scripts written for film? Of course not! There are some amazing movie monologues that are great to work on as actors. Even if it’s just for a bit of fun, learn one of these monologues below and enjoy…

Consequently, a German soldier conducts a search of a house suspected of hiding Jews. Where does the hawk look? He looks in the barn, he looks in the attic, he looks in the cellar, he looks everywhere he would hide, but there’s so many places it would never occur to a hawk to hide. However, the reason the Führer’s brought me off my Alps in Austria and placed me in French cow country today is because it does occur to me. Because I’m aware what tremendous feats human beings are capable of once they abandon dignity.

Ellis Boyd ‘Red’ Redding: Get busy living or get busy dying. That’s goddamn right. For the second time in my life, I’m guilty of committing a crime. Parole violation. Course, I doubt they’re going to throw up any road blocks for that. Not for an old crook like me. I find I’m so excited I can barely sit still or hold a thought in my head. I think it’s the excitement only a free man can feel. A free man at the start of a long journey whose conclusion is uncertain. I hope I can make it across the border. I hope to see my friend and shake his hand. I hope the Pacific is as blue as it has been in my dreams. I hope.

If I asked you about art you’d probably give me the skinny on every art book ever written. Michelangelo? You know a lot about him. Life’s work, political aspirations, him and the pope, sexual orientation, the whole works, right? But I bet you can’t tell me what it smells like in the Sistine Chapel. You’ve never actually stood there and looked up at that beautiful ceiling. Seen that. If I asked you about women you’d probably give me a syllabus of your personal favourites. You may have even been laid a few times. But you can’t tell me what it feels like to wake up next to a woman and feel truly happy. You’re a tough kid.

I ask you about war, and you’d probably, uh, throw Shakespeare at me, right? “Once more into the breach, dear friends.” But you’ve never been near one. You’ve never held your best friend’s head in your lap and watched him gasp his last breath, looking to you for help. And if I asked you about love you probably quote me a sonnet. But you’ve never looked at a woman and been totally vulnerable. Known someone could level you with her eyes. Feeling like! God put an angel on earth just for you…who could rescue you from the depths of hell. And you wouldn’t know what it’s like to be her angel and to have that love for her to be there forever. Through anything. Through cancer. You wouldn’t know about sleeping sitting’ up in a hospital room for two months holding her hand because the doctors could see in your eyes that the term visiting hours don’t apply to you. You don’t know about real loss, because that only occurs when you love something more than you love yourself. I doubt you’ve ever dared to love anybody that much. I look at you; I don’t see an intelligent, confident man; I see a cocky, scared shitless kid. But you’re a genius, Will. No one denies that. No one could possibly understand the depths of you. But you presume to know everything about me because you saw a painting of mine and you ripped my fuckin’ life apart. You’re an orphan right? Do you think I’d know the first thing about how hard your life has been, how you feel, who you are because I read Oliver Twist? Does that encapsulate you? Personally, I don’t give a shit about all that, because you know what? I can’t learn anything from you I can’t read in some fuckin’ book. Unless you wanna talk about you, who you are. And I’m fascinated. I’m in. But you don’t wanna do that, do you, sport? You’re terrified of what you might say. Your move, chief.

Alan: I’d like to, I’d like to say something that I’ve prepared tonight. Hello. How ’bout that ride in? I guess that’s why they call it Sin City. You guys might not know this, but I consider myself a bit of a loner. I tend to think of myself as a one-man wolf pack. But when my sister brought Doug home, I knew he was one of my own. And my wolf pack, it grew by one. So – there were two of us in the wolf pack. I was alone first in the pack, and then Doug joined in later. And six months ago, when Doug introduced me to you guys, I thought, ‘Wait a second, could it be?’ And now I know for sure, I just added two more guys to my wolf pack. Four of us wolves, running around the desert together, in Las Vegas, looking for strippers and cocaine. So tonight, I make a toast! (He pulled out a knife and cut his palm) Blood brothers! 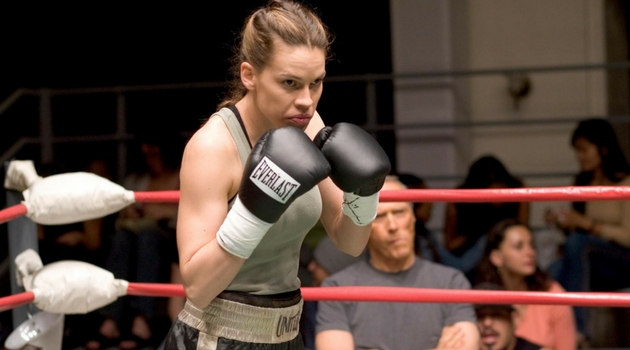 Maggie Fitzgerald: I’m 32, Mr. Dunn, and I’m here celebrating the fact that I spent another year scraping dishes and waitressing which is what I’ve been doing since 13, and according to you I’ll be 37 before I can even throw a decent punch, which I have to admit, after working on this speed bag for a month may be the God’s simple truth. Other truth is, my brother’s in prison, my sister cheats on welfare by pretending one of her babies is still alive, my daddy’s dead, and my momma weighs 312 pounds. If I was thinking straight I’d go back home, find a used trailer, buy a deep fryer and some Oreos. Problem is, this the only thing I ever felt good doing. If I’m too old for this then I got nothing. That enough truth to suit you?

Summer: I dream about flying. Not really flying. More like… floating. Like, it starts out I’m running really fast. And then the… terrain… gets all rocky and steep. But I don’t slow down. I just climb higher with every stride. Before I know it, I’m… floating.

I’m going so fast my feet don’t even touch the ground. I’m up in the air and I’m … I don’t know… free. It’s this incredible feeling.

But then I look down. And the minute I do… everything changes. There I am… I’m floating, high above the earth, nothing can touch me, right? I’m free and I’m safe and it hits me, just like that… I’m completely, utterly, alone.

And then I wake up. I’ve never told anyone that.

*this monologues doesn’t appear in final cut of the film.

Something’s Got to Give

Zoe: This is really fascinating, what’s going on at this table. Let’s take you and Erica. You’ve been
around the block a few times. What are you, around 60? 63. Fantastic! Never married, which as we
know, if you were a woman, would be a curse. You’d be an old maid, a spinster. Blah, blah, blah.
So instead of pitying you, they write an article about you. Celebrate your never-marrying. You’re
elusive and un-getable, a real catch.

Then, there’s my gorgeous sister here. Look at her. She is so accomplished. Most successful
female playwright since who? Lillian Hellmann? She’s over 50, divorced, and she sits in night after
night after night because available guys her age want something—forgive me, they want
somebody that looks like Marin. The over-50 dating scene is geared towards men leaving older
women out. And as a result, the women become more and more productive and therefore, more
and more interesting. Which, in turn, makes them even less desirable because as we all know,
men— especially older men— are threatened and afraid of productive, interesting women.

It is just so clear! Single older women as a demographic are about as f*cked a group as can ever
exist.

How to choose a monologue?

Picking a monologue can be tough. There’s the voice in your head constantly saying “you’ll find a better one”. The solution: just make the call.

You will never find the perfect monologue, so stop trying. As you are reading through lots of monologues see which ones resonate with you. Which ones give you that little excited feeling like you want to get up on stage or in front of a camera and play that role.

Note: as I mentioned in the introduction, I wouldn’t pick a famous movie monologue for an audition. It is distracting and you can’t help but be compared to the original actor who played the role. I would only choose a movie monologue if you have specifically been asked to prepare one.

Read more: How to Choose a Monologues

How to prepare your monologue?

Every actor has a different process, but whatever that process is, make sure you do it. It’s easy to just learn the lines and wing it, but it won’t be your best work.

Note: if you are doing a famous movie monologue, never mimic the original performance. Find a way to make it yours!

How to Rehearse a Monologue